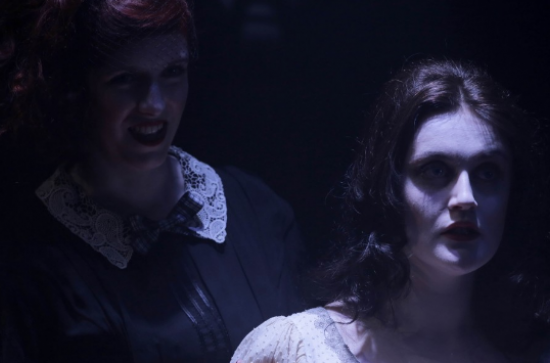 Listeners familiar with Cleary’s œuvre will recognise in Vampirella the intimacy, direct expression, and rich palette that are hallmarks of the composer’s style. Cleary’s most compelling recent output – Psychopompfor chamber ensemble (2012), Leda and the Swan for solo piano (2013), and Her Kind for voice and chamber orchestra (2014) – in addition to her founding of the Evlana Sinfonietta in 2015, highlight an affinity for a mixture of smaller-scale forces. Vampirella continues this tradition, sometimes singling out soloists, the chorus, chamber orchestra, individual instruments, and electronic timbres.

Moments of arresting drama evoke the idiom of Her Kind, which pitches a spiky soprano line against a taut chamber-orchestral fabric. Given the gothic theme one might fear a musical plunge into cold, deadening darkness but despite noir echoes of Cleary’s brooding tape piece Diamorphine (2005) and the bass slam that opens Leda and the Swan, Vampirella is very accessible and far from monochromatic. Contrasting sound combinations and bright brushstrokes of colour, as in the shimmering harp motif associated with the (anti)heroine, act as a foil to the blackness of the source material.

Vampirella is based on the 1976 Angela Carter radio play about Count Dracula’s daughter. Librettist Katy Hayes first adapted the material for a feminist theatre production in the 1990s. In her programme note Hayes expresses a desire to extend the gender aesthetic of Carter’s text into the operatic arena, presenting this incarnation of the Countess as the latest in a string of ‘strong women characters’ integral to the genre. Cleary’s sonic resurrection of the Countess is sensitive to that literary intent. At the same time, the composer articulates the complexities of the characters by creating an eclectic sound-world of striking beauty.

Set in a castle in the desolate Carpathian Mountains of Central Europe on the eve of World War I, Vampirella recalls early twentieth-century operas that oscillate between fairy-tale and horror tropes in their modernist explorations of the human psyche. As a one-act work, it immerses the audience in its haunted atmosphere and formally evokes Bartók’s claustrophobic single-act opera Bluebeard’s Castle (1911). Vampirellasubverts that opera’s relationship paradigm, however, by reversing the predator-victim gender roles. Seducing the latest man to cross the Carpathians – a virginal young soldier identified only as Hero – the Countess sings a siren song. Yet she intones, ‘I am a woman, young and beautiful,’ to a melancholy melody that emphasises her humanity, even vulnerability. She reprises this tune towards the end, reframing it in the past tense as a personal lament and persuading the audience to sympathise with a bloodthirsty woman (excellently portrayed by soprano Sarah Brady). The otherworldly choral writing enriches the emotional depth, while vivid instrumental scoring and electronic effects lend the work a quasi-cinematic feel occasionally redolent of Cleary’s film music.

The ironically-named Hero makes limited musical impact as he is mostly voiced through a Sprechstimme part. As Cleary’s programme note explains, he becomes more lyrical upon being drawn into the Countess’s realm. Yet, while the speech-like vocal persona effectively designates him as an outsider, I sometimes found this characterisation disruptive to the ethereal soundscape shrouding the libretto. Generally, though, the mood was sustained by the uniformly impressive cast, led by conductor Andrew Synnott. The production, directed by Conor Hanratty, was enhanced by potent colour and light symbolism in the set design. Vampirella is a welcome, thought-provoking addition to the Irish operatic repertoire.