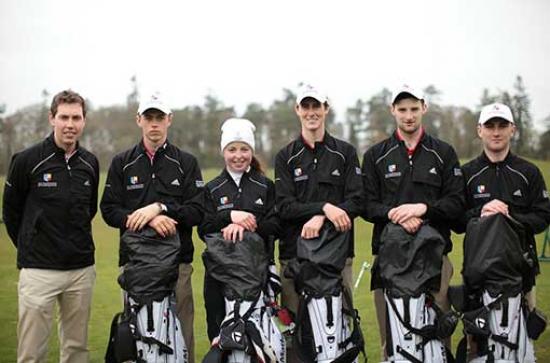 It was nail biting stuff today at the Irish Colleges Match Plays Finals at The Heritage Golf Resort. Both Maynooth University teams reached their respective finals with victories over UCD (match play championship) and IADT Dun Laoghaire (match play plate) in the semi finals. This set up a showdown with the University of Ulster (UU) in both events with UU the reigning match play champions

The Maynooth University A team looked dead and buried halfway through the back nine losing the third & fourth matches but rallied back into the match with late victories by Sinead Sexton and Alan Lowry on the 17th hole to set up a thrilling finish.

With  Maynooth University & UU tied on 2 points each, the match came down to the final match between double Intervarsity Series winner Shaun Carter (Maynooth University) and reigning Irish Youths champion Tiarnan McLarnon (UU). The match was a very close affair with the lead changing hands numerous times over the back nine. The match was level playing the 17th which saw McLarnon make a birdie from 50 feet while Carter responded at the 18th with a magnificent birdie 3 to take the match into tie holes and sudden death.

Both players halved the 19th, 20th, 21st & 22nd holes with very steady golf under the circumstances. On the 23rd both players missed the green with their approach shots. Carter chipped to 8 feet and McLarnon splashed out of the bunker to 3 feet and went on to make his putt for par for victory.

In the final of the Irish College Match Play Plate event, which involves teams who lose either their first or second matches in the premier event, Maynooth University came out on top with great wins from Gary Shaw, Stephen Kinch, Eoin O'Brien and Ger MacNamara,