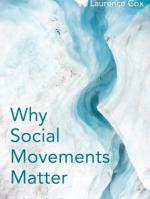 “This book came out of two fortnights that I was lucky enough to be able to spend as a researcher at the Collège d’Etudes Mondiales in Paris last year. While doing more technical research about how social movements are studied in different academic settings, I realised that there was also something important to be said about why social movements are worth studying in the first place.

Movements, activism, popular struggles or however you want to talk about them are everywhere in the social world, but often very poorly understood, not least by most of the professionals who represent the social world for a living – in academia, in the media, in politics. The fundamentally bottom-up nature of movement development means that approaches which are geared to describing the social world from a top-down perspective – “seeing like a state” as James Scott recently put it – consistently struggle to handle them to the same standards they apply in other areas.

The book falls into three sections. The first speaks to a general audience about what movements are like in everyday experience and across the wider historical timescale. The second is written for people who are involved in, or interested in, politics, about the relationship between social movements and social change. The third section is for academics and students outside social movement studies. It discusses how movements shape intellectual developments and about the relationship between understanding and changing the social world.”