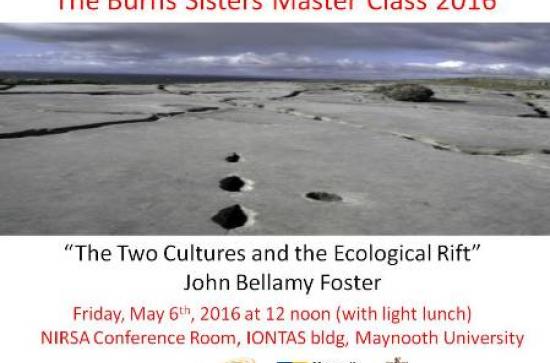 John Bellamy Foster is Professor of Sociology at the University of Oregon. His research is devoted to critical inquiries into theory and history, focusing primarily on the economic, political and ecological contradictions of capitalism and imperialism, but also encompassing the wider realm of social theory as a whole. Recent works include: Marx and the Earth: An Anti-Critique (co-authored with Paul Burkett) (Boston: Brill, 2016), The Endless Crisis: How Monopoly-Finance Capital Produces Stagnation and Upheaval from the USA to China (coauthored with Robert W. McChesney, New York: Monthly Review Press, 2012), What Every Environmentalist Needs to Know About Capitalism: A Citizen’s Guide to Capitalism and the Environment (co-authored with Fred Magdoff, New York: Monthly Review Press, 2011), and The Ecological Rift: Capitalism’s War with the Earth (co-authored with Brett Clark and Richard York) New York: Monthly Review Press, 2010)
*Lizzie and Mary Burns, the C19 working class Irish sisters and comrades of Friedrich Engels, had the ability to summon intellectuals not just to conceptualize concrete reality but crucially to experience it. Engels was brought through the slums of Manchester by the sisters and on three occasions they guided him through colonized Ireland. Keeping Karl Marx abreast of one such trip, Engels ended a letter to his collaborator with the words: “I shall write shortly if you won’t come over soon. How about it?” Marx didn’t make it. In evoking the spirit of the Burns sisters we invited John Bellamy Foster to Ireland and happily he accepted our invitation.

John Bellamy Foster’s visit has been organized under the auspices of the 3U partnership (DCU, MU and RCSI), with support from the Department of Sociology at MU and the Crops, Plants and Bioeconomy Research Cluster at MU.

To register for this Master Class please email sociology.department@mu.ie before Friday, April 29th, 2016.

Plants, Crops & the Bioeconomy
Back to top