How the 1941 North Strand bombings wiped out an entire family

How the 1941 North Strand bombings wiped out an entire family

Eighty years ago, four bombs were dropped on Dublin's North Strand by the German Luftwaffe during the Second World War. It was not the first time the Germans had bombed southern Ireland during the course of the war (bombs had landed at Terenure in Dublin earlier that year), but the sheer devastation and the loss of life which occurred on that night set it apart from the others.
When daylight broke, the horrific details of the bombing became apparent as much of the North Strand lay in ruins. The government of the Irish Free State, which had declared itself neutral in the conflict, was left reeling. An Taoiseach, Éamon de Valera, who attended some of the funerals of the victims, quickly moved to voice his anger at what had happened.

In a statement from the Irish Government Information Bureau in the days that followed, ministers confirmed that the bombs were of "German origin" and that a protest was being made in the "strongest terms" to the German government. What followed was a long wait for compensation for the victims of the bombings, but West Germany finally accepted responsibility in the early 1950s and monies received from the Marshall Plan were used to pay compensation.

The bombing of the North Strand in the early hours of 31 May 1941 claimed 28 lives, with one quarter of them from the one family. The bombing and the deaths of the Brown family is a reminder of the complexities of Ireland’s stance of neutrality during the war. For the Browns and the other victims, the notion that the theatre of war, as it had been in the generation before, was in some far off place was shattered.

A member of the Local Defence Force (LDF) at Store Street, Harry Brown was on patrol on May 30th with his colleagues when the first bombs fell on Ballybough, Summerhill and the Phoenix Part, where minor damage was reported at Aras an Uachtarain. Whether the patrol had finished their duties or he feared for the safety of his family, Brown returned home to his house at 25 North Strand in the early hours of the morning. He was not long home when the fourth bomb, believed to have been all of 500lbs, landed on the area.

In total, 300 houses were severely damaged, 90 people were injured and 28 killed. Brown was amongst the dead, as was his 65-year-old mother, Mary, his wife Mary (or Mollie as she was known, 32) and their children Maureen (7), Ann (5), Edward (3) and Angela (2). Three generations were killed in an instant. Brown was found near the door of the house and partially clothed, the assumption being that he had just returned home when the bomb fell.

Prior to the bombing, Brown’s story mirrored that of many others in inter-war Ireland. A native of Edenderry, Co Offaly, he was forced to leave home in search of work following the economic downturn of the 1930s. He had been employed in the once booming Alesbury furniture manufacturers in Edenderry, where his father Edward had come from Athy at the beginning of the century in search of employment.

The Browns then moved to Dublin where Harry found work as a coach painter with the GSR Bus Department. The family settled in the North Strand with other families from Edenderry and appeared to have enjoyed their time there, although tragedy befell them two years earlier when Edward Brown was killed in a motor accident near Newcomen Bridge in Dublin. 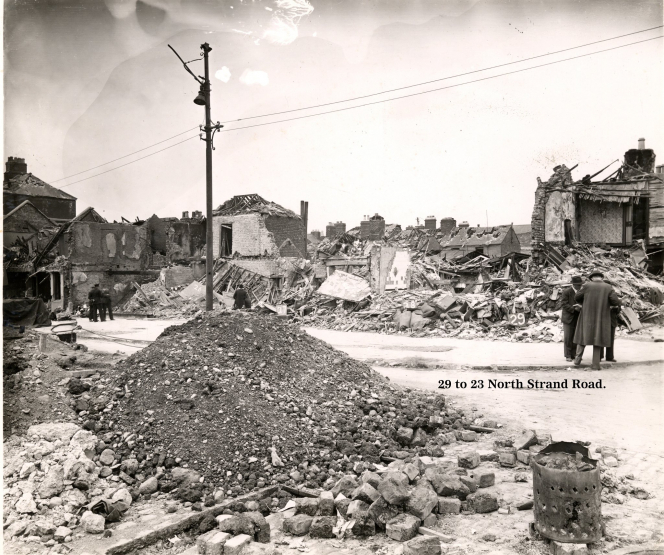 Adding to the tragic circumstances was the fact that they were due to move to Cabra in early June 1941 as the widowed Mary Brown had decided to return to the Edenderry area to live with relatives there. One can imagine the sense of excitement in the Brown house towards the end of May as preparations were being made for the move to Cabra. However, as the Leinster Leader newspaper starkly put it, in a matter of seconds an entire family ‘was wiped out’.

More fortunate were the Denehan and Kelly families, also from Edenderry, who lived close to the Browns and were also caught up in the bombing. Stephen Denehan recalled how the windows and doors of his house were wrecked, while the roof collapsed amongst his sleeping children who were hurt and bruised. Howard Kelly described the bombing as the "most terrifying and appalling experience that could be imagined". They were among the lucky ones. The task of identifying the dead fell to John Corrigan, father of Harry’s wife, Mary. He was accompanied at the inquest by other members of the family and local politicians from the Edenderry area, including George O’Connell, chairman of the Edenderry Town Commissioners who had been in school with Harry Brown.

On 3 June, the remains of the Brown family left the morgue in Dublin bound for Edenderry and members of the LDF Number 3 Store Street Company formed a guard of honour for the family. The O’Brien family, who owned the Universal Providing Stores in Edenderry, provided an open back lorry to convey the coffins from Dublin for the funeral.

Thousands lined the streets to meet the family who had only left Edenderry a few short years before. Harry Brown had been a member of the Edenderry hurling team and players and officials from the club were amongst those who paid their respects. As the coffins were unloaded from the lorry at St Mary’s Church, the sight of the little white coffins of the children visibly upset those in attendance, and indeed was the scenes were recalled in Edenderry for decades afterwards.

The following day, the funeral procession made its way to Drumcooley cemetery, once again attended by several thousand mourners. At the graveside, LDF Group Leader Peter Forde formed a cordon around the single grave into which the seven coffins were interred. Three volleys were fired over the grave by a firing party from the Edenderry LDF. Once more, there were an outpouring of grief and, as George O’Connell stated, ‘Edenderry had been stirred before the appalling nature of the tragedy which had befallen one of its old and beloved families’.

Today, a visitor to the cemetery might pass the headstone which marks the final resting place of three generations of the Brown family and wonder how they all perished on a single day in May 1941. No mention is made on the headstone of the circumstances which brought about their deaths, but their memory is kept alive amongst their large number of relatives. It is important that it is and that the human cost of the war is recorded so that future generations will understand how Ireland was affected by the Second World War.