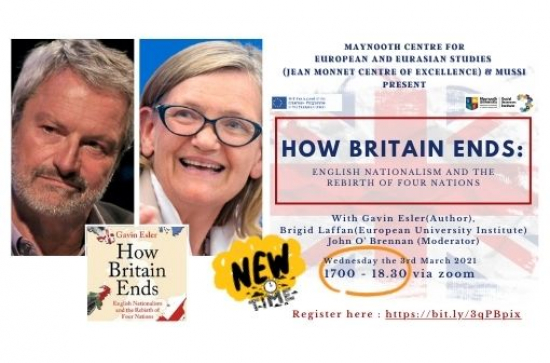 The Maynooth Centre for European and Eurasian Studies and MUSSI will host a discussion about an important new book, How Britain Ends: English Nationalism and the Rebirth of Four Nations (Apollo Books, 2021) by Gavin Esler.

Gavin Esler is the Chancellor of the University of Kent and one of the best-known broadcasters in the world, as host previously of the flagship Newsnight programme on BBC2, a presenter with BBC World News, and as a reporter where he had postings in Northern Ireland and the United States, amongst others.  The response to the book will be provided by Professor Brigid Laffan, Director of the Robert Schuman Centre at the European University Institute. The event will be moderated by Professor John O' Brennan, and there will be a Questions and Answers session following the contributions of the speakers. The event is part of a series organised by the Jean Monnet Centre of Excellence, in partnership with the Maynooth Social Sciences Institute (MUSSI).

*After registering, you will receive a confirmation email with the link to the online live event, the event is 90 minutes long and this will include an open Q&A section at the end where the audience will be able to participate in the discussion.

In the event that the webinar is oversubscribed you will be redirected to the MUSSI Facebook page where the event will also be live streamed.

'An eloquent, forensic examination of resurgent English nationalism as the force that has driven Brexit and may now break up the United Kingdom' Jonathan Coe

In the past, it was possible to live with delightful confusion: one could be English or British, Scottish or Irish, and a citizen/subject of the United Kingdom (or Great Britain). For years that state has been what Gavin Esler calls a 'secret federation', but without the explicit federal arrangements that allow Germany or the USA to survive.

Now the archaic state, which doesn't have a written constitution, is coming under terrible strain. The English revolt against Europe is also a revolt against the awkward squads of the Scottish and Irish, and most English conservatives would be happy to get rid of Northern Ireland and Scotland as the price of getting Brexit done. The pressures to declare Scottish independence and to push for a border poll that would unite Ireland may become irresistible.

Can England and Wales find a way of dealing with the state's new place in the world? What constitutional, federal arrangements might prevent the disintegration of the British state, which has survived in its present form for 400 years?

How Britain Ends is a book about history, but also about the strange, complicated identity of Britishness.

The book can be purchased through the University bookshop here https://shop.universitybooks.ie//GeneralBooks/9781800241053