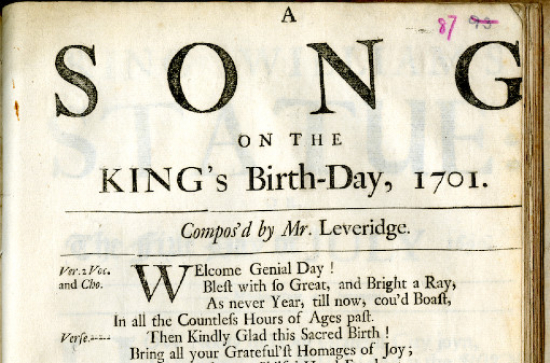 Oxford University Press has published the first 13 chapters to be included in its 2022 publication The Oxford Handbook of Irish Song. Dr Estelle Murphy’s chapter, ‘Ceremonial Song in Eighteenth-Century Dublin: Cousser’s and Dubourg’s Odes and Serenatas’, is included among these and is available to read via the Maynooth University Library at this LINK (sign in required). It discusses the works composed by the Masters of the State Music in Ireland, Johann Sigismund Cousser and Matthew Dubourg, showing that their ceremonial music for Dublin constitutes a body of works invaluable to our understanding of the cultural and political climate in the city in the eighteenth century.

The Oxford Handbook of Irish Song will appear in print later this year.