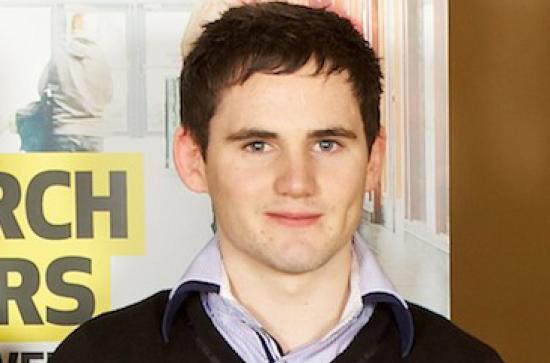 Mr Stephen Dolan BSc, a second year PhD student in the Department of Biology, Maynooth University was awarded a best poster prize at the International Asperfest Meeting which was held in Seville, Spain on 21-22 March 2014. This meeting was attended by over 200 fungal genetics researchers from throughout Europe, North America and beyond, and the winning poster addressed the topic “Exploring the Enzymatic Mechanism and Biological Function of Gliotoxin S-methylation in Aspergillus fumigatus”. The prize, a monetary award, was won in the face of top class competition from over 100 PhD students from around the world.

Stephen commenced his PhD studies in 2012 under the supervision of Professor Sean Doyle in the Department of Biology, and the work is funded by an Irish Research Council Postgraduate Scholarship to Stephen and an SFI Principal Investigator award to Professor Doyle. Stephen is a first class honours graduate of the BSc (Biomedical Science) programme at Maynooth University (2012).

Stephen presented his research on the chemoenzymatic modification of a toxic biomolecule, called gliotoxin, from the pathogenic fungus Aspergillus fumigatus. His work has demonstrated an entirely new biological phenomenon whereby gliotoxin can be enzymatically modified by a new class of fungal enzyme, which in turn has many biomedical and biotechnological implications. Importantly, the work was facilitated by access to the superb instrumentation infrastructure, including HPLC and LC-MS equipment, at Maynooth University. This equipment was secured by competitive funding from the Higher Education Authority and Science Foundation Ireland.

Aspergillus fumigatus can cause severe disease in immunocompromised and cystic fibrosis patients. Research in Professor Doyle’s laboratory is directed towards both anti-fungal drug target identification and improved diagnosis of the infection, and is carried out in collaboration with other researchers in the Department of Biology. Professor Doyle commented “Stephen’s work has illuminated completely new biology in this important human pathogen, however his findings transcend a specific area and have implications for many biological systems. Maynooth University is very lucky to attract PhD students of his calibre.”