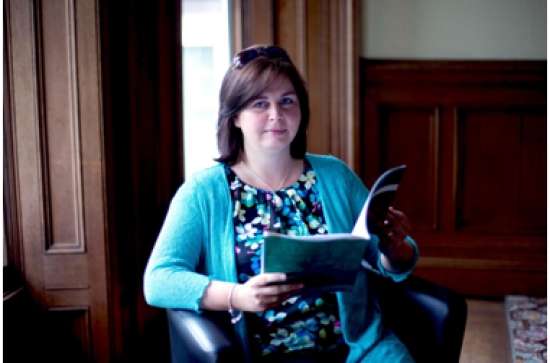 Dr. Kathleen McLoughlin, a researcher at the Maynooth University Department of Psychology, has been awarded the 2015 Early Researcher Award (first prize) by the European Association for Palliative Care.

Dr Kathleen McLoughlin is a Psychologist with a special interest in the field of palliative and end of life care from a public health perspective. Her interest in this area dates back to 2002 when she was involved in conducting a palliative care needs assessment, noting in particular the fear and stigma associated with palliative care. In 2005 she secured the Health Research Board / Irish Hospice Foundation (IHF) Building Partnerships for a Healthier Society Research Award to further investigate attitudes toward palliative care, a study that subsequently formed the basis of a PhD in Psychology, awarded by Maynooth University (MU) under the supervision of Dr Sinead McGilloway. This research, together with Kathleen’s passion for health promoting palliative care, served as the catalyst to the development of Ireland’s first Compassionate Communities project at Milford Care Centre (MCC).

Kathleen has held senior posts in research and education in the Irish healthcare service, the IHF and MCC. In 2014 Kathleen was recognised for her passion and commitment to palliative care and named CMG Irish Healthcare Person of the Year. She currently holds the 2014 All Ireland Institute of Hospice and Palliative Care / Irish Cancer Society Postdoctoral Research Fellowship, based between MU and MCC and is working with an international team of researchers to investigate social and practical supports for people living at home with advanced life-limiting illness.