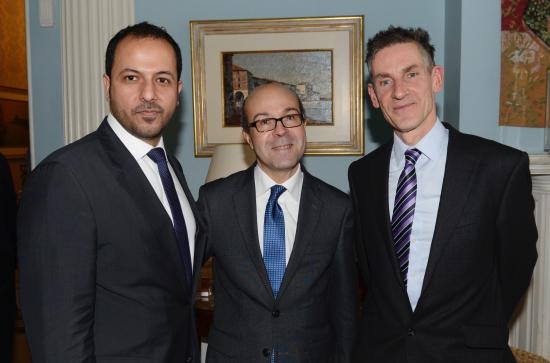 On Thursday 8th February, 33 Resident Ambassadors to Ireland attended the County Kildare Chamber Inaugural Ambassadors Luncheon in the K Club, Straffan.  Over 60 business representatives were also in attendance, 50 of which represented Kildare Businesses and included John Scanlan, Maynooth University Commercialisation Office. The purpose of the event was to showcase Kildare as a location of choice for business and to facilitate open discussions between Kildare’s key business leaders and representatives from countries in EMEA, the Americas and Australasia.

Allan Shine, CEO of the Chamber’s opening address highlighted why Kildare is the opportune location for future business enterprise in Ireland, stating “Kildare has a track record of attracting and retaining global companies, which continue to expand their footprint, reflecting the region’s competitiveness and talent driven population.”

The keynote address at the lunch was given by Frank Ryan, Chairman of IDA Ireland.  Frank discussed how multinationals responsible for some household names e.g. Coca Cola and P&G, first looked at establishing sites in EMEA, subsequently Ireland and finally agreed on residing in County Kildare. In addition, he cited Bill O’Brien (O’Brien Fine Foods) and Larry Murrin (Dawn Farms) as indigenous businesses who have raised the standing of Kildare nationally.

From an IDA perspective, Frank was involved in the ’98 team who brought Intel to Leixlip which has resulted in a $12.5bn investment in the local economy since inception. He also mentioned the largest indigenous investment in recent years was the establishment of the Kerry Group site in Naas, Kildare.

As Corporation Tax continues to attract attention, Frank reinforced to the overseas representatives that this low tax rate is not the primary reason to do business in Ireland. The IDA is 70 years in existence this year and it’s focus on education, ease of doing business in Ireland and our membership of the EU are contributing factors to establishing industry in Ireland.

Frank concluded his speech by saying that Ireland is open to bilateral trade agreements, quoting Charles Stewart Parnell “No man has the right to fix the boundary to the march of a nation”. He went on to clarify “Modern economies are interdependent, how one acts affects many. Therefore, co-opetition is necessary.”