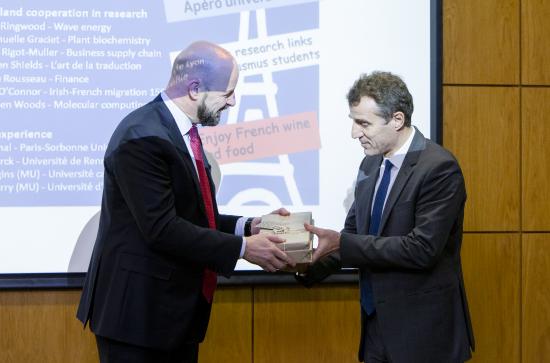 In collaboration with France Alumni and the French Embassy, the MU commercialisation office hosted an “Apéro universitaire” on the evening of December 11th. The evening was opened by MU president Professor Phillip Nolan and His Excellency the French Ambassador Mr. Stéphane Crouzat. Speaking in French, Professor Nolan emphasised the importance of international collaboration for MU and how the University has always enjoyed close scholarly links with France. The Ambassador reinforced this closeness, mentioning that MU was the first Irish university he visited upon his arrival in Ireland. He later commented that he was impressed by the attendance and the very broad collaborations across several disciplines that exist between MU and French universities.

Seven researchers from MU presented five-minute vignettes of their research and links with France. Prof. John Ringwood spoke about his research in ocean energy and his close ties with French universities and how French collaborators have been instrumental in the development of his group. Dr. Emmanuelle Graciet, originally from Paris, spoke about her work on plant biology and mechanisms and models for understanding crop resilience to climate change. Dr. Patrick Rigot-Muller spoke about his work on the modelling and optimisation of global shipping routes. Dr. Kathleen Shields entertained the audience in her presentation about language translation, and how English words used in every day French have changed meaning. Dr. Fabrice Rousseau, who collaborates with University of Toulouse, spoke about high speed trading on international markets. Prof. Thomas O’Connor spoke about his personal experiences in Paris Sorbonne and his work on the history of migration between Ireland and France. And finally Prof. Damien Woods introduced us to his work on molecular computing and his team which comprises almost entirely of French postdocs and postgrads.

Two French and two Irish students then spoke, in English and in French respectively, about their Erasmus experiences (Claire Raynal, Lucas Staerck, Molly Higgins and Nicole Sherry). They were particularly impressive in how they represented the value and importance of cultural and language links between Ireland and France, facilitated by the Erasmus programme and the network it develops. Philippine Henry, representing France Alumni, and who helped organise the event, was on hand to help promote and develop these links. Dr. Marc Daumas, the attaché scientifique from the French Embassy spoke about how the possibilities of developing broader and deeper research links. Knowledge transfer links that MU has with French universities were discussed and in particular, how the Irish system is similar to the French system of consortia managed knowledge transfer. 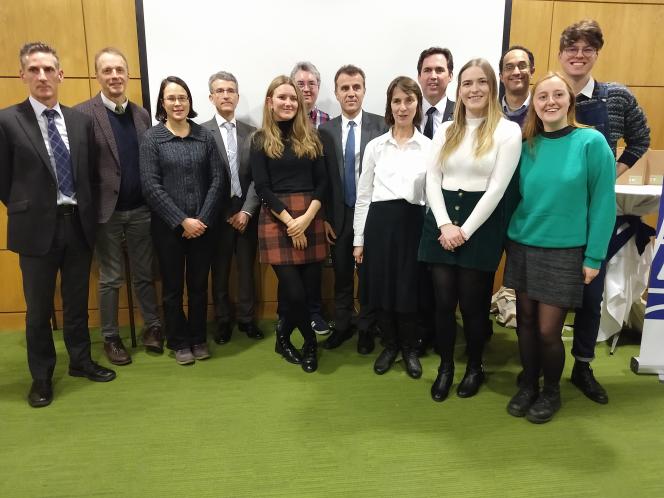