Maynooth University Researcher of the Year 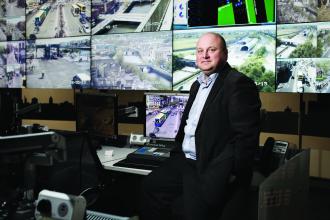 The 2018 winner of the MU Research Achievement Award, Professor Rob Kitchin, Department of Geography and the MU Social Sciences Institute, was recognised for numerous achievements since

2013, and his role as an academic leader of exceptional standing both nationally and internationally.
Since moving to Maynooth University in 1998 Professor Kitchin has advanced to become a scholar and academic leader of exceptional standing in Geography and the Social Sciences, both nationally and
internationally. He has made a number of highly significant contributions to conceptual thought and empirical research, disciplinary and research leadership, and pedagogy and teaching. In the last
five years he has held both a European Research Council advanced investigator award (the only advanced award winner at Maynooth) and a Science Foundation Ireland Investigator award.
Concurrent with his ERC project – The Programmable City – Professor Kitchin has produced a substantial body of new work that has had an immediate impact. His output since 2013 is 2 written
books, 4 edited books, one edited special issue, 30 refereed articles (5 more submitted), 17 other articles, 25 book chapters (10 others in press/submitted), and 3 reports. These recent pieces have already been collectively  cited 3700 times, with a number of them quickly becoming important reference points (3 of the pieces have been cited over 500 times and 6 more over 100 times).
His article in Regional Studies, Regional Science, co‑authored with Tracey Lauriault and Gavin McArdle, won the Regional Studies Association best paper prize in that journal for 2015. Since 2013
he has organized 8 workshops and presented 121 invited talks, 28 conference talks, and taken part in 23 panel discussions.
The research undertaken on the ERC project – The Programmable City – builds on and extends two decades of work on the relationship between digital technology, space and mapping. As well as elaborating his concepts of code/space, data assemblage, and automated management, the research has provided a critical examination of three significant new phenomenon – big data, spatial media, and smart cities. The  research is inherently interdisciplinary and in addition to making important contributions to the fields of digital geographies, software studies, critical data studies, and smart cities, it is having a
wider impact across a number of disciplines, including Urban Studies, Sociology, Science and Technology Studies, Communication Studies, Computer Science, and others. Beyond citation, an
indication of this cross‑disciplinary impact is that 75% of his invited talks during his career have been presented outside of his home discipline of Geography (in the last five years more than
90%) and he current receives c.75 invites for talks per year. Furthermore, the work is having traction beyond academia, with  the research feeding into smart city policy globally. A key
report in this respect was one commissioned by the Data Forum of the Department of Taoiseach on smart cities, privacy and security (a revised version of which was published in Philosophical Transactions, the flagship journal of the Royal Society). In addition, work from the project has been featured 60 times in national and international media (including RTÉ, BBC, Die Welt, Boston Globe, ABC Australia, The Guardian, New Scientist).

The significance of Professor Kitchin’s work has been acknowledged nationally and internationally by the presentation of the Gold Medal for the Social Sciences by the Royal Irish Academy in 2013,