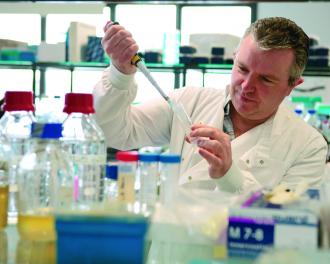 Professor Paul Moynagh, Head of the Department of Biology and Director of the MU Human Health Research Institute.

Through his research Professor Moynagh has achieved an international reputation of distinction in understanding the process of inflammation, and he is a recognised world leader in drawing out the particular role of Pellino proteins, which have specific importance. Inflammation is a component of almost every major disease process and especially in chronic and degenerative diseases and therefore is one of the central medical problems of our time.

Over the period 2013–2017, Professor Moynagh authored 22 international journal articles, all of high merit, but in the context of the achievement award, six of these publications were highlighted due to their high quality and impact. These top‑level publications include 1 senior authored publication in Nature Immunology, 1 co‑authored paper in Nature Neuroscience, 3 senior authored publications in Nature Communications and 1 senior authored paper in Immunity. He has also sole authored an invited review to Nature Reviews Immunology. Immunity and Nature Immunology are the #1 and #2 world ranked journals that publish original research articles in Immunology. Nature Neuroscience is the #1 world ranked journal for original research in Neuroscience. These publications in the last five years encompass research of the highest international standing and impact, and have been cited by peers over 300 times.
Professor Moynagh’s track record of leading research has previously garnered peer recognition, as indicated by his receipt in 2009 of the National University of Ireland (NUI) Centennial Prize for Academic Publishing in Medical and Health Sciences. Paul was also awarded the 2014 Irish Area Section Biochemical Society (IASBS) medal in recognition of an Irish‑based researcher who has made an outstanding contribution during his/her career in the broad area of Biochemistry.
Professor Moynagh’s research has been made possible by his very significant successes in competing for major external research support. In  the last 5 years he had active external funding of over €8M million for basic research in his laboratory, including three successive SFI Investigator awards. His research expertise has also led to collaboration with companies such as Pfizer and Alltech and in the last 5 years he has successfully competed for €1.04 million funding from industry partners and innovation awards. Four patents have been filed. All the funding secured has been  directed exclusively to cutting‑edge research of fundamental importance and has made a major contribution to the research profile of Maynooth University in recent years.
Professor Moynagh has also played a pioneering role in postgraduate research in Ireland. He was the Director of the Health Research Board PhD scholars programme in Immunology that partnered Maynooth University with TCD and Queens University Belfast and was responsible for training 24 PhD students from 2010‑14. This was one of the first structured PhD programmes in Ireland and represented a new approach to PhD training resulting in graduates with skills and experience beyond expertise in a specialised research area. He was also MU Director of the HEA‑funded PhD programme in Therapeutics and Bioanalytics (2011–2015) that partnered MU with RCSI, DCU and IT Tallaght and trained 29 students.