Early Career Achievement Award in the Faculty of Social Sciences 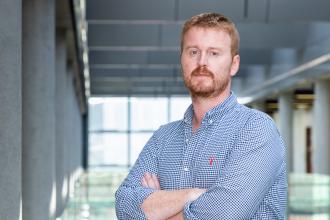 Dr Murphy is a part of the deep fabric of Maynooth University having started as an undergraduate, graduated with his PhD in Geography in 2007, and now senior lecturer in that department.  His research contributions over the three years 2015–2017 have been outstanding, with 25 papers in a range of leading international journals in his field. These included high impact publications in journals such as Science, Proceedings of the National  Academy of Sciences and Bulletin of the American Meteorological Society. During that time he also published 5 book chapters. Unusually, Dr Murphy works across the physical and social sciences and has published at the highest levels in both – highly regarded  work relating to the latter has been published in Annals of the Association of American Geographers and Climatic Change. His overall body of work   has been cited over 800 times.

Dr Murphy’s body of work on Irish rainfall and streamflow records makes him a recognised leader in the study and understanding of hydroclimatology and the records he has compiled are making a telling contribution nationally and internationally. In three years his research   has transformed understanding of historical climatology in Ireland. A recently published paper brings together the leading international experts in the field, including several current and former authors in the Intergovernmental Panel on Climate Change, and is testament to their respect for his work.
His research has advanced understanding the historical rainfall climatology of the Island of Ireland through development of a quality assured monthly rainfall network for Ireland from 1850, a drought catalogue from 1766, and a continuous monthly rainfall series that extends to 1711.  In addition, his work on developing quality assured time series of historical river flows for the Island of Ireland has made a significant contribution to understanding changes in flood characteristics in Europe, contributing to publications in Science and the Journal of Hydrology.
Dr Murphy’s research consistently displays high levels of innovation. Together with third year undergraduates, postgrads and others he has led  the rescue of in excess of 3,500 years’ worth of early Irish rainfall records. Not only will this rescued data transform our understanding of long‑term local and regional rainfall changes over Ireland, but the method has been recognised by the World Meteorological Organization as representing a new and innovative best‑practice.
In the three years 2015–2017, Dr Murphy has been directly awarded over €1 million in research funding, including a prestigious Career Development Award (CDA) from Science Foundation Ireland.   Other funding sources include the Environmental Protection Agency, the Office of Public Works, and Irish Water. Dr Murphy works directly with the OPW and Irish Water to integrate climate information into decision making. Dr Murphy’s research has developed novel approaches for stress testing allowances for climate change in the development of flood protection infrastructure. His work on historical droughts and future climate change is also underpinningIreland’s first national water plan. He sits on the National Adaptation Committee which oversees implementation of climate change adaptation planning across all sectors.