Professor Michael Rothberg - 'Debating the Holocaust: Multidirectional Memory and the Politics of Comparison in Contemporary Germany' 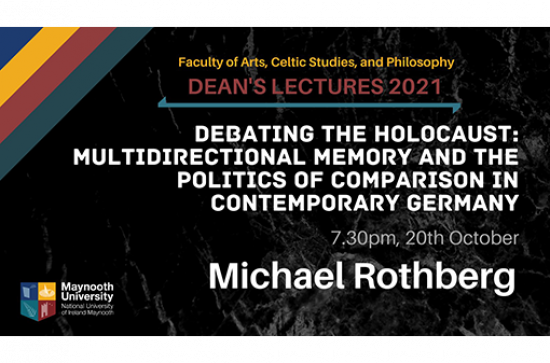 He is the author of three influential books. The Implicated Subject: Beyond Victims and Perpetrators (2019) and Multidirectional Memory: Remembering the Holocaust in the Age of Decolonization (2009) were both published by Stanford University Press in their “Cultural Memory in the Present” series. Traumatic Realism: The Demands of Holocaust Representation (2000) was published by the University of Minnesota Press. Multidirectional Memory has been translated into French, German, and Polish; its publication in Germany in 2021 led to a national debate in the mainstream press about the relationship between the Holocaust and other histories of violence.

The lecture will be on Zoom.

Currently no Events found, view our past events archive
Back to top
Back to top