Maynooth University Office of the President 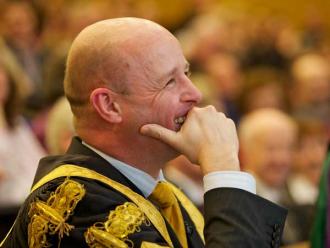 Professor Philip Nolan is a native of Dublin, and received his BSc (Hons) degree in Physiology in 1988 and the primary medical degrees of MB BCh BAO in 1991 from University College Dublin (UCD).

He practiced medicine for a short time, but having become involved in research and teaching as a student, was drawn to an academic career. He earned a PhD for his research on the control of breathing and the cardiovascular system during sleep. He has a strong track record in research that includes publications in leading international journals and a number of prestigious awards received as a young researcher, including the Donegan Medal from the Royal Academy of Medicine in Ireland, the Watts Medal from the Health Research Board, and the Heymans-De Castro-Neil medal from the International Society for Arterial Chemoreception.

In 1996 Professor Nolan joined the staff of University College Dublin, where he was recognized both as an outstanding researcher, receiving a UCD President’s Research Award in 2000, and as an excellent and innovative teacher, earning a UCD President’s Teaching Award in 2002. He led the development of UCD’s Health Sciences Centre, which opened in 2005, and acted as Director of the UCD Conway Institute from 2003-2004.

Professor Nolan was appointed Registrar and Deputy President of UCD in 2004. He worked closely with the President, Dr. Hugh Brady, in the development of a new strategy for the University, and led a radical reform of the undergraduate curriculum, UCD Horizons. Professor Nolan also oversaw major developments in undergraduate and graduate education, internationalisation, widening participation, quality, student administration, and library & information technology services.

In August of 2011, Professor Nolan was appointed President of Maynooth University. Early in his tenure he initiated a collegial and engaged process to establish a new strategy for the University in its research, teaching and engagement activities. This has led to a major investment in research capacity, focused on areas of scholarly strength in the humanities, social sciences, information and communications technology and biochemical sciences, and significant growth in postgraduate and international education. He also has led a comprehensive, university-wide effort to re-imagine virtually every aspect of the University’s undergraduate curriculum to ensure that students graduate with the critical thinking and working skills they need to adapt and thrive in today’s rapidly changing world. Many of the curricular changes—which range from broader entry routes and the study of modern languages to increased flexibility to choose a course of study or to combine different disciplines—are considered sector-leading among Irish higher education institutions.

Professor Nolan also has offered a strong public voice and leadership in urging the university sector to reform the third-level entry process and slow the “points race.” He chairs the Irish Universities Association’s Task Group on Reform of University Selection and Entry.