New Publication by Dr Amos Edelheit: For a Skeptical Peripatetic. Festschrift in Honor of John Glucker 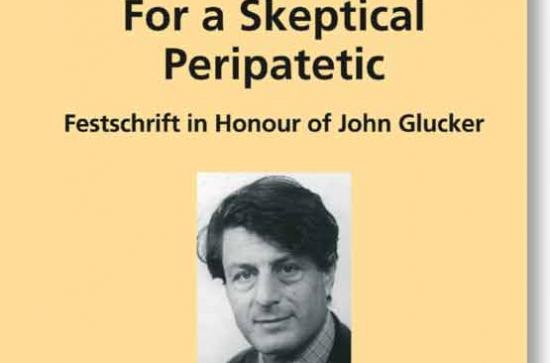 The Department is delighted to announce a new publication by Dr Amos Edelheit:

Summary:
This book celebrates the renowned Classical scholar, Prof. John Glucker, whose work has influenced many areas of research in Greek philosophy, Classical literature, and the reception of the Classics in modern scholarship. This collection of articles, written especially for this volume by some of the leading scholars in the field, concentrates on ethics in the Classical period and its reception in the modern era.

Konstantine Boudouris (University of Athens) argues that "every education is primarily an education in virtue", and pays particular attention to the ethics of Plato and Aristotle. Plato receives further attention in the form of three studies on individual dialogues: Voula Tsouna (University of California, Santa Barbara) emphasizes how the analysis itself of Charmides necessarily contributes to one's own development of temperance (the overt subject of the dialogue); Yosef Liebersohn (Bar Ilan University) concentrates on the least analysed of the three conversations in Gorgias, and determines that Plato's Polus is intended to represent the typical citizen in a democratic regime, with all that that entails in the context of rhetoric and ethics; Ivor Ludlam (University of Haifa) analyses Hippias Minor and compares his conclusions with the conclusions of his earlier analysis of Hippias Major, demonstrating how such comparison between dialogues may lead to a new understanding of Plato's ethical thought, and of development in that thought.

Aristotle's ethics also come under further scrutiny. Jaap Mansfeld (Utrecht University) observes that Aristotle's references to his predecessors differ according to the length (and hence status) of the tradition of each branch of philosophy, physics being the longest, dialectic the shortest, and ethics somewhere in between; William Fortenbaugh (Rutgers University) considers the problematic so-called "questionable mean-dispositions", treated variously in the three Aristotelian ethical treatises; Dorothea Frede (University of California, Berkeley) weighs up the pros and cons of Aristotle's virtue-based ethics, resulting in what looks very much like an Academic suspension of judgement.

And so to the tangled web of Hellenistic schools: Keimpe Algra (Utrecht University) reassesses the evidence adduced in support of an argument that Stoic physics derives in part from a dogmatic Academic source; Tomohiko Kondo (Hokkaido University) looks at the use to which Plato's dialogues were put in the ethical disputations between Stoics and Academics; Anna Maria Ioppolo (University of Rome) asks whether the Academic Clitomachus misrepresented his master Carneades on the meaning of "following the 'probable'".

Cicero may not be the only one to think that philosophy declined in the Hellenistic period; but, according to Woldemar Görler (University of Saarland), it was his particular ambition to hand down to his successors an improved, Romanized, philosophy; Harold Tarrant (University of Newcastle, Australia) discovers Seneca repurposing an anti-sceptical source found in Epicurus; Jan Opsomer (Catholic University of Louvain) intriguingly fleshes out the first century CE Platonist Ofellius Laetus; John Dillon (Trinity College Dublin) explores the multifacetedness of Plutarch's Platonism which extends to both the dogmatic and the sceptical phases of the Academy; Andrew Smith (University College Dublin) looks at a burning issue in Plotinus, namely the analogy of fire and heat; coming full circle, André Laks (University of Paris-Sorbonne) raises new questions about Diogenes Laertius and his use of sources for his prologue on the origins of philosophy.

On the history of the tradition of Greek philosophy in modern times, Jill Kraye (University of London) traces the development of attitudes towards Stoicism, from the Renaissance fascination with Roman Stoics to the rediscovery in the eighteenth century of the earlier Greek Stoics; Amos Edelheit (Maynooth University) examines the redivision of Aristotelian philosophy by the fifteenth century Nicoletto Vernia; Tiziano Dorandi (Jean Pépin Centre, French National Centre for Scientific Research) presents a section of Politian's lectures on Aristotle and Porphyry, and throws light on Politian's modus operandi; Malcolm Schofield (Cambridge University) argues that the two Platos of Victorian Britain (Grube's utilitarian and Jowett's idealist Plato contrasted in John Glucker's 1996 article) have in common an atomist approach to the dialogues and a strong belief in the historian's obligation to give Plato his place in history, while at the same time looking for modern applications of what was best in Plato's political thought, particularly in the sphere of education.