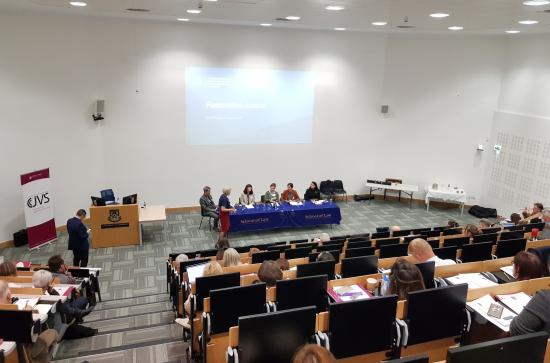 The purpose of the symposium – entitled Implementing Restorative Justice in Law, Policy and Practice – was to explore the implementation of restorative justice in other jurisdictions and to see what Ireland might learn from research and experience elsewhere. This followed the publication in June of the Irish RJS4C national strategy which has, as one of its strategic pillars, the development of accessible and comprehensive restorative justice services in Ireland.

The day began with Dr. Leahy welcoming everyone to UL, before Dr. Marder spoke about recent developments in restorative justice policy and practice in Ireland. The rest of the morning and early afternoon consisted of three panels of international speakers who discussed the laws, policies and models of restorative justice services in their countries.

On the first panel, Dr. Petra Masopust Sachova (Palacký University Olomouc, Czech Republic) spoke about the Czech experience of the ‘under-one-roof’ model, in which the Czech Probation Service is responsible for victim support and delivering restorative justice at all stages of the criminal justice process. She outlined the benefits and challenges of this approach, including the tensions that arise when statutory probation work leaves little time to be proactive in offering and delivering victim-offender mediation. Next, Dr. Aarne Kinnunen (Ministry of Justice, Finland) spoke about the legal framework underpinning Finland’s national mediation service, which provides restorative justice in criminal cases. Judge Mary Emer Larkin, who sits in Limerick District Court, chaired the panel.

The second panel featured Clifford Grimason (HM Prison and Probation Service, England and Wales) and Henrik Elonhimo (National Institute for Health and Welfare, Finland). The former spoke about cultural challenges to the implementation of restorative practices in prisons and probation services. The latter gave more information about policy developments in Finland that support a comprehensive approach to restorative justice delivery, including case types, mediator recruitment and recent debates around using mediation with intimate partnership violence. Inspector Kieran Farrelly of An Garda Síochána, who recently began a new position in the Garda Youth Diversion Programme, chaired this panel.

The third panel, chaired by Johnny Connolly (University of Limerick, REPPP project), explored models of service in Norway and England. Karen Paus described the operations of Norway’s national lay mediation service (Konfliktrådet), and Becky Beard spoke about the local multi-agency partnership and service that she manages (Restorative Gloucestershire). Karen emphasised the value brought by volunteers in operating a diverse and committed mediation service, while Becky spoke of the importance of multi-agency partnerships, co-working arrangements and information sharing agreements in establishing and sustaining a local service.

The final panel session featured a roundtable of Irish stakeholders, chaired by Ben Ryan (Department of Justice) who introduced the session by considering the future possibilities for restorative justice law and policy in Ireland. The roundtable then contained speakers: Michele Puckhaber (Crime Victims Helpline), Emily Sheary (Restorative Justice in the Community), Irene Gilmore (Probation Service) and Caitlin Lewis (University of Limerick). Each person discussed what they felt was working well in Ireland in relation to restorative justice, what they believed to be the main challenges going forward, and what they saw as the main learnings from the day’s international speakers. The day closed with remarks by Vivian Geiran (Director, Probation Service) who summarised the key messages from the international speakers and expressed optimism about the future of restorative justice in Ireland.

The symposium at UL followed a number of successful events already in 2019, including the first national symposium at Maynooth University in March, and a multi-agency workshop at the Probation Service in August to explore the design of restorative justice services.  The RJS4C partners will organise further events in Ireland in 2020, including a presentation on the development of restorative justice in the Netherlands by Gert Jan Slump (Restorative Justice Nederland) at Maynooth University on Friday 21st February. Further details of this and other events will be released soon. In the meantime, please join the project’s stakeholder group to receive updates from the project by emailing ian.marder@mu.ie.

Dr. Marder will also deliver a new module on restorative justice in Maynooth University in the 2019/20 academic year, as part of the Department of Law’s MA in Comparative Criminology and Criminal Justice, which he chairs.