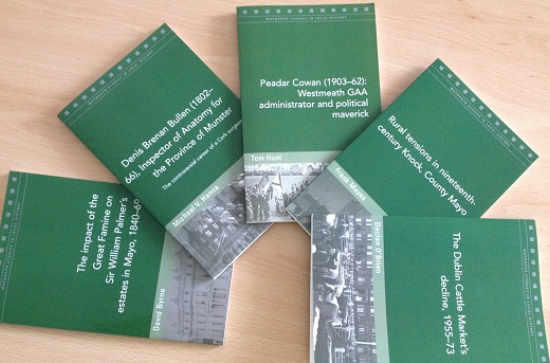 Five new volumes have been published in the Maynooth Studies in Local History Series (general editor Raymond Gillespie). The volumes by David Byrne, Michael Hanna, Tom Hunt, Frank Mayes and Declan O'Brien are available from all good bookshops and directly from Four Courts Press.
Some of these stories are viewed from the perspective of great houses and through the eyes of the gentry. Sir William Palmer presided over an estate of 80,000 acres - mostly in County Mayo over the worst of the famine years and for many it was a struggle for survival. Other stories tell about conditions from the bottom up. Knock might be best known for its nineteenth-century apparition but the event took place in a charged world of near famine, falling population, faction fighting and disputes between landlord and tenant.
Another story of decline is that of the Dublin cattle market in the late 1950s and 1960s. At its height the market sold up to 6,000 cattle a week, attracting buyers from across Britain and Continental Europe. The rise of the mart in the early 1970s brought this thriving trade to an end and changed the character of Dublin's north inner city forever.
Two stories deal with the world of the comfortable middle class. The dramatic career of Peadar Cowan encompassed the world of GAA politics and national politics. His political career was a checkered one from the Labour party through his own party, Vanguard to Clann na Poblachta he served for a considerable period in Dáil Éireann. His highlighting of injustice in the prison system, based on his own experience before his world unraveled in the 1950s.
Finally, another story of middle-class politics is revealed in the study of Denis Brenna Bullen, a surgeon in early nineteenth-century Cork who became involved in the medical politics of the city. However, it was his involvement in medical education, particularly through UCC that would leave the most enduring legacy, particularly his conflicts both within the college and without.
Together these five pamphlets cast new shards of light into dark areas not just of the local past but of the story of the evolution of Ireland generally. They reveal elusive stories that chronicle the lives of real people in the past.