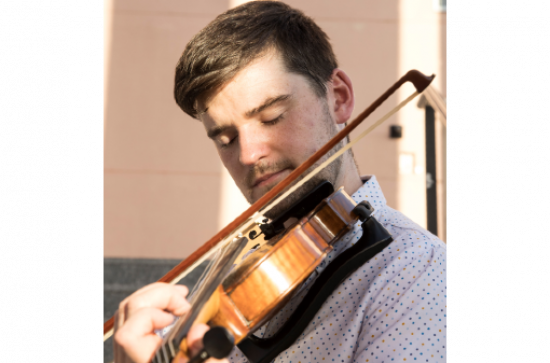 Aidan Connolly is a fiddle player from Rathfarnham who has been heavily influenced both by the musicians of his locality and the great fiddlers of times past: Paddy Cronin, Paddy Canny and Denis Murphy to name but a few. He has studied traditional music in-depth and is a highly respected authority on traditional instrumental music from the 1920s onwards. Aidan draws on archive materials in his work and has gathered a vast repertoire of tunes of both traditional and more recent origin, as well as from other folk music genres.

Aidan has developed his own unique style of playing and is a highly sought-after performer both in Ireland and abroad. He released his debut album, Be Off, in October 2016 to critical acclaim. Aidan relocated to the Spanish city of Valencia in 2018 and is now a regular performer in Spain, Ireland, and further afield in the USA, Australia, and Japan. In 2019, Aidan collaborated with fiddle player John Daly on Away On Up The Road, a must-have album for fiddle fans. He recently released his debut solo album The Portland Bow, featuring an eclectic mix of popular and lesser-known traditional repertoire, including tunes from Scotland and Cape Breton, while remaining close to the Sliabh Luachra tradition with which he is especially associated.

We are delighted to welcome Aidan Connolly to Maynooth.