Facilitating better understanding of how our island operates

Facilitating better understanding of how our island operates 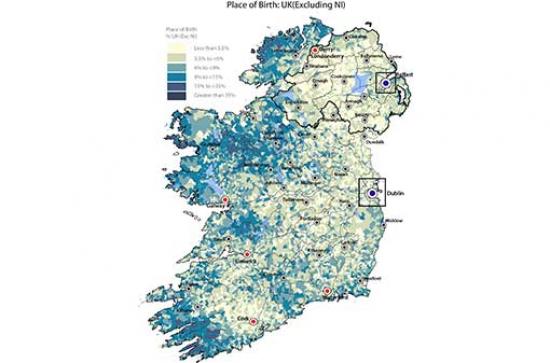 Maynooth University ’s All-Island Research Observatory (AIRO) has announced the development of a new All-Island Digital Atlas designed to facilitate a greater understanding of how our island operates.  Essentially a public good service, the AIRO project trades in maps, data analysis, policy advice, and research and training. Working with both public and private sector organisations, AIRO deals with a wide variety of different types of information such as demographics, housing, wind energy, crime and cultural mapping amongst others. In its latest project, using the most up to date data drawn from the north and south census conducted in 2011, AIRO has compiled a detailed snapshot of the social and economic characteristics at both local and national level across the island of Ireland.

Speaking at the launch of the Digital Atlas, AIRO Director Justin Gleeson, said: “This valuable new digital resource will allow for far greater integrated and informed decision making and more accurate forward planning. Central to AIRO’s philosophy is the belief that all decision making should be informed by accurate and transparent evidence and we can now demonstrate island of Ireland dataset expertise on population, religion, place of birth, ethnic group, housing, labour force, industry, transport and general health.  Over the coming months however we hope to further add to this portfolio of mapping expertise, and develop new insights into how our island operates and how we can best plan for the future. This work will be carried out with colleagues at the International Centre for Local and Regional Development (ICLRD).”

The data behind the Atlas has been made available through extensive collaboration with the census units at the Central Statistics Office (CSO) and the Northern Ireland Research and Statistics Agency.  Over the coming months AIRO will also produce an accompanying hard back atlas looking at a variety of socio-demographic trends across the Island.  In addition, AIRO is running a series of 'Data for Decisions' training sessions for public and private sector bodies on using this data for better decision making.

The project is part-financed by the European Union’s INTERREG IVA programme managed by the Special EU Programmes Body and is being developed under the Evidence-Based Planning theme of the Ireland Northern Ireland Cross-border Cooperation Observatory (INICCO-2) CrosSPlaN-2 funded research programme.

Over the coming weeks the Irish Times will run a visual column featuring some of the emerging themes from the Atlas.
Readers can view the Atlas here: http://airomaps.nuim.ie/AllIslandAtlas