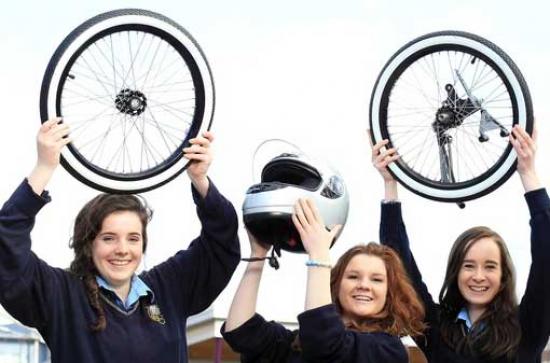 On 31st of May 2014 the Department of Electronic Engineering at Maynooth University, with funding from the global chip giant, Intel, will field the first team from the Republic of Ireland to compete in the international IET Formula 24 challenge from Greenpower Education .

The IET Formula 24 is an electric car challenge which requires secondary school students, guided by teachers and an industry mentor, to design, build, manage, fundraise and then race a single seat electric car in an endurance challenge with limited fuel over a lapped course.  The Department of Electronic Engineering at Maynooth University has recruited a team of transition year students from Maynooth Post Primary School to enter the 12 to 16 year category.

Greenpower, an educational trust sponsored by multinational engineering conglomerate Siemens, was established with the objective of encouraging education in the subjects of sustainable engineering and technology to young people.

According to Daniel Greenan from Siemens, “there is huge potential for broadening the horizons of young people through this challenge.  They will be competing against both UK schools and corporate entries from teams like Jaguar Landrover and Lockheed Martin”.

Padraig Golden from Intel Ireland who is co-mentoring the team with Maynooth University explained that “students will be required to form a team and run it in the same way as a Formula 1 team.  They will be using Siemens Solid Edge software to design the car on a computer, build it at Maynooth University and then race the car against other teams. Students will also have to use enterprise skills and think creatively in order to resource their team.  They will be exposed to engineering skills not normally encountered until they have left education, and they will be empowered to take their ideas and make them happen.”

Andrew Meehan from the Department of Electronic Engineering at Maynooth University further elaborated that “these students from Maynooth Post Primary School have taken on a unique project. They will be exposed a wide range of problems that engineers face in the real world. They will use the SolidEdge software to model different effects on the car and learn to use an embedded controller to monitor all aspects of the cars performance. We are delighted to be the lead university in the Republic of Ireland to help to introduce this challenge to the students of Maynooth Post Primary.”

Projects for both primary and secondary school children have been running successfully in Northern Ireland since 2013 with participation growing steadily. Island wide participation was the goal from the outset.

Stuart Christy from the regional ambassador team said: “We enjoy a rich heritage in motorsport, innovation and engineering in Ireland, and recognized the potential for using motorsport to being communities and our young people from across the island together. Working towards the common goal of innovating a winning race car, we hope that children from every county will come together, race together, and take their place in laying down tomorrow’s heritage together.”