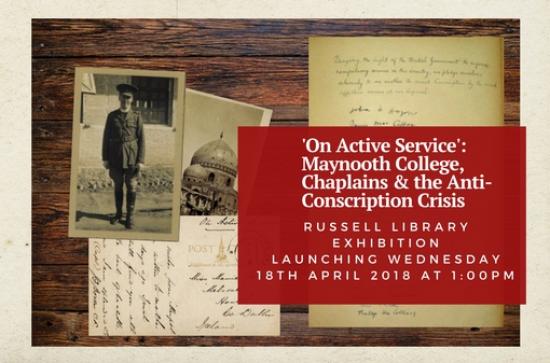 Ireland’s national seminary at Maynooth experienced a profound transformative period from the summer of 1916 until the winter of 1918.  In 1916 the College supported the recruitment of Irish Catholic priests as army chaplains by conducting early ordinations to meet the demand for priests.

Yet, by 1918 staff and students were mobilised against conscription, with many signing a petition that denied the right of the British Government to enforce compulsory military service in Ireland. This stemmed from a landmark meeting held at Maynooth College in April 1918 at which leaders of all shades of nationalist opinion and members of the Irish Catholic Hierarchy united in denouncing conscription in Ireland.

Maynooth University is hosting an exhibition at the Russell Library to commemorate the centenary of a landmark meeting at Maynooth College between members of the Mansion House Conference to oppose conscription and the Irish Catholic hierarchy.

The exhibition will explore the themes of army chaplaincy recruitment and resistance to conscription in Ireland during World War I and will be on display in the Russell Library until 31 May 2018.

A deputation from the Mansion House Conference, including Éamon de Valera and Lord Mayor of Dublin Laurence O’Neill, travelled by taxi from Dublin to Maynooth College for a landmark meeting with the Irish Catholic hierarchy on the 18th April 1918 during which they agreed to denounce any attempts by the British Government to enforce conscription in Ireland.

The exhibition will feature a number of documents and artefacts including a petition signed by over 250 staff and students at Maynooth College resisting the right of the British Government to enforce military service by the most effective means at their disposal. A selection of original photographs and postcards from a Maynooth alumnus serving as an army chaplain in Mesopotamia during WW1 will also be on display for the first time in the Russell Library.

The exhibition is part of Maynooth University’s programme to commemorate key events during the revolutionary period that helped shape the course of history and the development of an independent Ireland.

The launch is open to the public and is free to attend but those interested should contact the Russell Library (library.russell@mu.ie) to confirm their place

This event is also part of Maynooth Week 2018. In June 2017 Maynooth University celebrated the 20th anniversary of its founding as an independent university. Maynooth Week 2018 is part of a year-long series of programmes and activities marking this milestone.