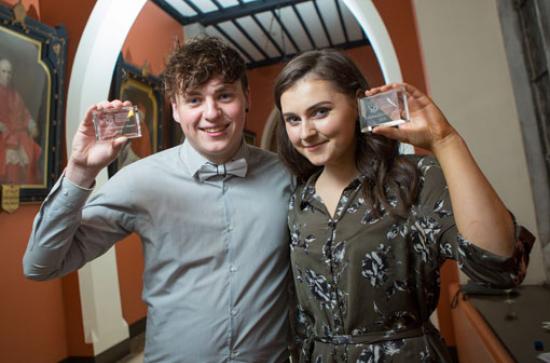 Maynooth University recognised the achievements of some of Ireland’s brightest and most promising first-year students at a celebration on-campus Tuesday, 3 November, awarding 115 Entrance Scholarships to students who achieved 525 points or more in the Leaving Certificate examination.

This year’s entrance scholars are among 2,000 first years to experience the first aspects of a new undergraduate curriculum at Maynooth University which will take full effect in 2016 and 2017. Options available to first yeas now include critical skills modules, which develop the intellectual and communication skills required in today’s workplace, and the ability to take elective modules in areas such as Entrepreneurship, Global Environmental Change and a range of languages to augment students’ main degree subjects and expose them to new disciplines and ways of approaching problems.

Professor Philip Nolan, President of Maynooth University, congratulated the Entrance Scholars, saying: “During your time at Maynooth University you will gain both a deep subject knowledge, and the critical thinking and working skills that employers value. The new undergraduate curriculum at Maynooth is about preparing you to question, to analyse, to communicate, to think—with the aim that you graduate with the skills and qualities you need to thrive in a world where change is a given and adaptability is essential.”

More than 25 students studying the Bachelor in Education degree were recognised on the night for their Leaving Certificate achievements. Among the other popular courses represented were the BA in Media Studies, BSc in Computational Thinking, and the BA in International Finance and Economics.