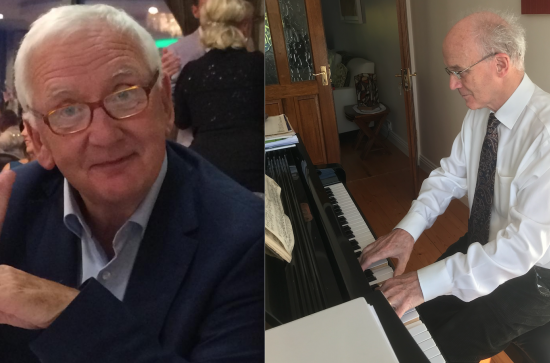 Padraig O’Rourke’s career has included appearances in opera, concert and recitals in Ireland, the UK, continental Europe and the United States. The range of music in which he has been involved covers opera from Monteverdi to Carlisle Floyd in whose opera “Of Mice and Men” he scored notable success with Wexford Festival Opera. He has also appeared widely in concert work  singing music as diverse as Szymanowski’s “Stabat Mater”, Delius’s “Sea Drift” and Eric Sweeney’s “The Deer’s Cry”. However, it is from the Lieder repertoire  that he derives the greatest musical satisfaction.
He has also enjoyed a career as a broadcaster and his Sunday morning classical music programme “Music Choice” ran on RTE Radio One for twenty-three years. Among other programmes he conducted a series of interviews with well known singers including Sherill Milnes, Denis O’Neill, Roberto Alagna, Angela Gheorgiu, Frederika von Stada, Gundula Janowitz and Dietrich Fischer Dieskau.

Michael Grant commenced his piano studies at the age of six and was the recipient of all the major piano prizes at the Feis Ceoil.
He has played in venues in most of the European mainland as well as in Britain and the United States, as well as acting as musical director for several musical societies and choral groups. He is an experienced broadcaster and has presented music programmes for Lyric FM, RTE Radio One and Local Radio. His annual series of lectures for Dublin City Libraries is widely acclaimed and regarded as a highlight of the Library Service.
His musical collaboration with Padraig O’Rourke spans more than forty years.