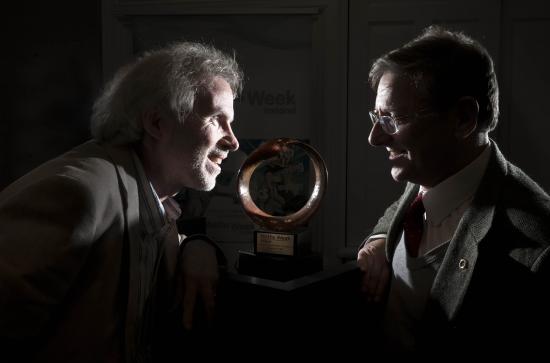 Maynooth University is delighted to announce that Maynooth University mathematicians Prof Anthony O’Farrell and Dr Fiacre Ó Cairbre, have been honoured as this year’s recipients of the Maths Week Ireland Award for their contribution to raising public awareness of maths.

The annual award is presented during Maths Week Ireland, the world’s largest festival of maths and numeracy.

Prof O'Farrell founded the annual Hamilton walk in 1990 and Dr Ó Cairbre has now run it for many years. The walk celebrates the day, October 16, and the route taken by William Rowan Hamilton one of the world’s most outstanding mathematicians, who discovered quaternions in a stroke of inspiration while walking along the banks of the Royal Canal in Dublin. His discovery changed the future of mathematics. Hamilton scratched his formulas for the quaternions into the wall at Broome Bridge, Cabra.

Prof O’Farrell was appointed professor of mathematics at Maynooth in 1975, where he spent most of his career. He contributed widely to the mathematical profession in Ireland and was elected to the Royal Irish Academy in 1980. He worked at the Irish Meteorological Service from 1964 to 1968, and for most of that time he was a student of mathematical science at UCD.