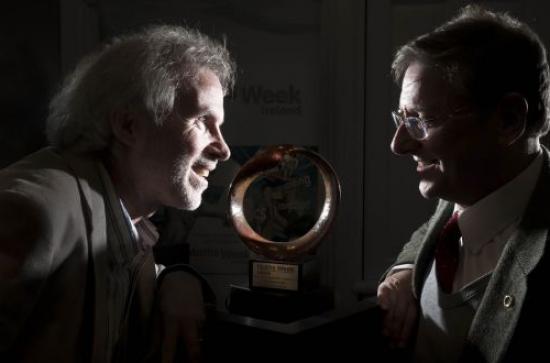 Congratulations to Professor Anthony O’Farrell and Dr Fiacre Ó Cairbre, Maynooth University Maths & Stats Dept. who were honoured as this year’s recipients of the Maths Week Ireland Award for their contribution to raising public awareness of Mathematics.

The Maths Week Ireland Award was instigated in 2016 to recognise outstanding contribution to Raising Public Awareness of Mathematics in Ireland. It was awarded jointly to Professor Anthony O’Farrell and Dr Fiacre Ó Cairbre of Maynooth University for founding and running the Hamilton Walk for 28 years and for other work in promoting awareness of William Rowan Hamilton, Irish mathematics heritage and mathematics in general.

Co-ordinated by Calmast at Waterford Institute of Technology, Maths Week Ireland is an inclusive all-island annual festival to promote mathematics and its applications. It runs as a partnership of over 50 public and private sector institutions and groups, including the universities and institutes of technology, professional bodies, libraries and visitors centres who are committed to promoting an interest in mathematics, as well as many of Ireland's flagship employers. Over 250,000 are expected to engage this year. Maths Week Ireland 2018 runs from 13th – 21st October.