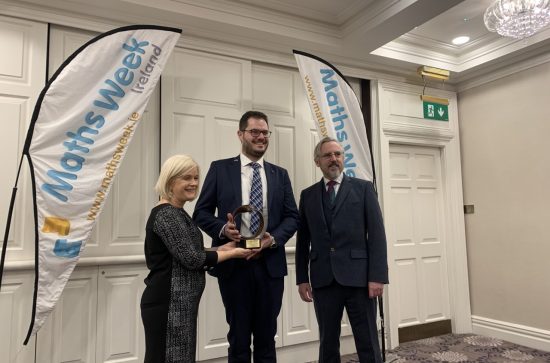 Congratulations to Dr. Rafael De Andrade Moral on his well deserved award from the Irish Maths Society to recognise his significant contribution to raising public awareness of mathematics.

The Maths Week Ireland Award was instigated in 2016 to recognise outstanding contribution to Raising Public Awareness of Mathematics.

Co-ordinated by Calmast, South East Technological University ‘s STEM Engagement Centre,  Maths Week Ireland is an inclusive all-island annual festival to promote mathematics and its applications. It runs as a partnership of over 50 public and private sector institutions and groups, including the universities and institutes of technology, professional bodies, libraries and visitors centres who are committed to promoting an interest in mathematics, as well as many of Ireland's flagship employers. Over 450,000 have taken part in Maths Week 2022 which has started on the 15th October and runs until Sunday 23rd October