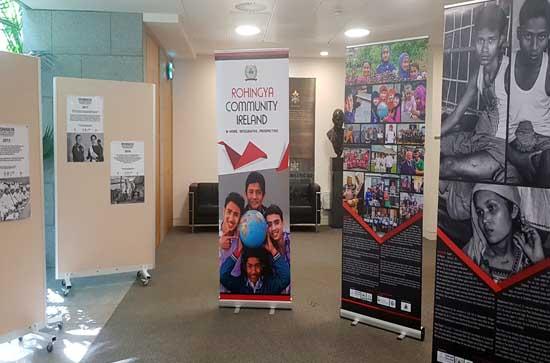 As part of the World Community Development Conference, Maynooth University will play host to a photography exhibition which runs until Friday 6 July. The exhibition, organised by the Free Rohingya Coalition Ireland, is titled ‘A walk through the persecutions of Rohingya in Burma and the situations of Rohingya refugees in Bangladesh’. The photographs, taken by Mohammed Rafique, document the persecutions of the Rohingya in Myanmar. The exhibition will highlight the timeline of persecutions of Rohingya in their homeland of Rakhine State. The Rohingya have been denied rights to self-identity and basic human rights, stripped of citizenship and subjected to what the UN has referred to as ‘a textbook case of genocide’ that expelled nearly 700,000 Rohingya to neighbouring Bangladesh on August 25th 2017. Rafique recently visited the refugee camps in Bangladesh and witnessed the traumatic scenes of suffering and displacement.

The Rohingya have been rendered stateless. They are denied access to education, health care and shelter. The tactics employed by Aung San Suu Kyi clearly indicate crimes against humanity. Her orchestrated campaign to obliterate the Rohingya continues. She has recently issued a directive not to use the name “Rohingya” in any media outlets or reports. Aung San Suu Kyi and the military government of Myanmar are attempting to write the Rohingya out of history.

Since the initial launch of the exhibition in the Mansion house in May the exhibition has been extended to include photographic evidence of the experiences of the Rohingya community in Carlow. In 2009, 78 Rohingya refugees arrived in Carlow as part of the refugee resettlement programme coordinated by Irish Government and UNHCR. The refugees were part of the 250,000 Rohingya who fled their native land Burma [Myanmar] during the Burmese Military’s “Operation Clean Nation” in 1991/2

Their new home in Carlow is providing opportunities to rebuild their lives. There is access to education, social care, safety, support, shelter and friends. They can walk freely on the streets of Carlow and are greeted warmly. Some have found jobs and some are studying at third level. Their lives bear no resemblance to the struggles of survival in the camps of Bangladesh and their homeland of Myanmar.

The Rohingya communities throughout the world are very aware of the threat to their existence.