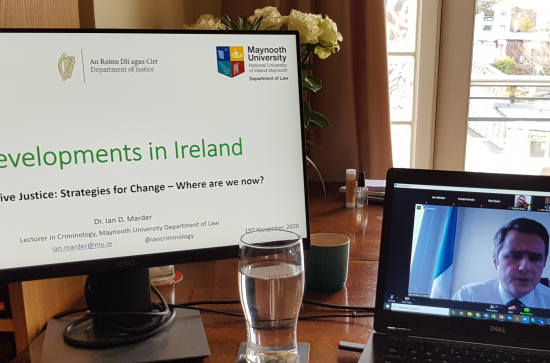 The webinar began with Ursula Fernée welcoming the participants and introducing the Minister of State. He further set the tone for the afternoon by making reference to international research and best practice indicating the potential benefits of restorative justice for victims and perpetrators of all offences, including where serious harm has taken place. The Minister also spoke about the need to establish a more cohesive restorative justice service across Ireland, and outlined the objectives of the corresponding Programme for Government commitment and provisions of the recent report on supporting victims of sexual violence.

Programme for Government (p.84): “We will […] work with all criminal justice agencies to build capacity to deliver restorative justice, safely and effectively.”

Supporting a Victim’s Journey: A plan to help victims and vulnerable witnesses in sexual violence cases (p.64): “Once [an ongoing mapping exercise] is complete, the Department [of Justice] will establish a multi-agency group to scope requirements for a more integrated consistent, visible and high quality Restorative Justice service for vulnerable victims who wish to pursue that pathway.”

Deaglán Ó Briain (Department of Justice) then spoke, elaborating on his Department’s work in these areas. He described the restorative justice and practice elements of the forthcoming youth justice strategy and the training in restorative practices for youth workers working within Garda Youth Diversion Projects that will happen in 2021. Deaglán contextualised this work with reference to other evidence-led programmes, such as creating targeted approaches for young adults, collaborating with the Department of Health and implementing court accompaniment services for victims nationwide.

Deaglán’s intervention was bookended with talks by Dr. Ian Marder, who spoke initially about the RJS4C team’s work and the national and institutional developments in 2020. He described ongoing training and other activities by the Irish Prison Service College, the mentions of restorative practices in recent reports by the Inspector of Prisons, and efforts by restorative justice providers to adapt to COVID-19 and expand their services. He also outlined work, funded by the Department of Justice, to develop a dedicated website for restorative justice in Ireland, and to collect case studies and conduct a mapping exercise which would be published on that website in early 2021. Ian’s second piece focused in turn on the UN, which published its Handbook on Restorative Justice Programmes (2nd ed.), the EU, which published its 2020-2025 Strategy on Victims’ Rights, and the Council of Europe, which is working on two Recommendations incorporating restorative justice provisions. He then described work being undertaken by partners in other jurisdictions, including Scotland, Estonia, the Netherland and the Czech Republic.

After a lively question and answer session involving conversations around the use of restorative justice in cases without named or direct victims, to support the reintegration of people upon leaving prison, and in response to hate crime (among other contexts discussed), Ben Ryan (Assistant Secretary, Department of Justice) provided closing remarks. He noted that restorative justice is fundamentally about relationships, and that stakeholders should continue collaborating to enhance Ireland’s capacity in this area.