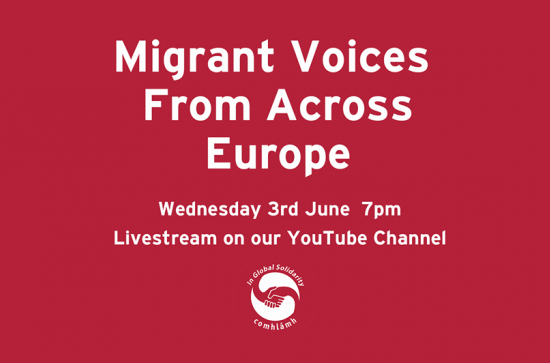 Last night’s Comhlámh #FirstWeds event was a discussion with migrant-led organisations from four countries in Europe – France, Italy, Slovenia and Ireland - to hear about what different migrant communities are experiencing during the current crisis, and what state and community responses have been in each context.  Click to listen to a livestream recording of the debate.

The event was facilitated by Tom Campbell, Dept. of International Development and was joined by Mavis Ramazani from the Movement of Asylum Seekers in Ireland (MASI).

They were also joined by Katja Utrosa from Infokolpa, a migrant led project in Ljubljana, Slovenia which is run by asylum seekers, refugees, migrant workers, local and international activists. Infokolpa are actively engaged in monitoring the border violence (SLO/CRO) and integration of their new comrades into the state welfare system, as well as other activities in the field of advocacy, migration movement and any kind of integration.

From Italy they heard from Richard Braude from Arci Porco Rosso, an autonomous anti-racist drop in centre that supports legal, social and health information. They work to ensure that those who rely on its services are supported in such a way as to eventually acquire the ability to support others, thus putting in motion a virtuous circle of support and solidarity. A focal part of their work is encouraging migrant representation and self-organization.

Last but not least, Frances Timberlake from Refugee Women’s Centre in Calais joined the conversation. Their work includes providing holistic support for migrant families living without shelter in Calais, Grande-Synthe, and in surrounding accommodation centres.  They are committed to creating safe spaces for women and children, providing them with the means to live independently and with dignity, and advocating for access to shelter and for human rights to be met.

The project aims to promote citizen participation and combat social exclusion by linking newly arrived young migrants with young people who have volunteered in the Global South. It supports a bottom-up approach to integration based on the transformative potential of volunteering experiences and on the migration experiences of young people arriving into Europe. For more info, please check out https://action4inclusion.eu/ or follow https://www.facebook.com/IC4LOP/