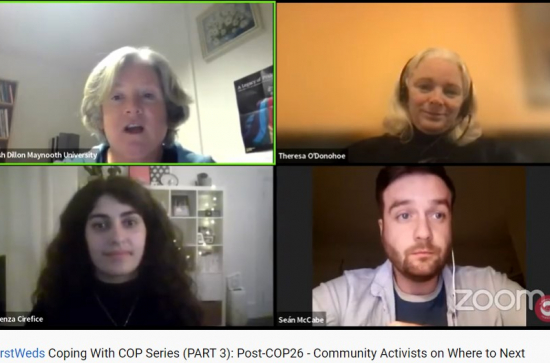 Dr Eilish Dillon moderated the December 2021 #FirstWeds conversation in partnership with Comhlámh. The final conversation for the Autumn series continued the exploration of COP26 and the climate crisis, featuring Community Activists discussing 'Where to Next?’. Eilish was joined by Theresa O’Donohue, Futureproof Clare;  Seán McCabe, the TASC Climate Justice Centre; and V’cenza Cirefice, Slì Eile, The Galway Feminist Collective and the Women’s Earth and Climate Action Network .

The panel explored some of what happened at COP26 and considered how questions of climate justice are showing up here in Ireland. Crucially they shared inspiration and ideas for how people can get (more) involved in action for climate justice from Ireland.
Theresa O’Donohue is a mother of 5 and a climate activist living in Co. Clare. She co-founded Futureproof Clare, Transition Ireland and Northern Ireland as well as various other groups since 2006 and as she moved across Ireland. Her aim has always been to raise a flag so that climate activists can find allies and collaborate, without blame, building a better world.

V’cenza Cirefice is currently researching resistance to extractivism in the Sperrins range of mountains in Northern Ireland for NUIG and is involved in the climate movement through groups including Slì Eile, The Galway Feminist Collective and the Women’s Earth and Climate Action Network. V’cenza is interested in feminist approaches to the climate crisis, rural grassroots struggles, post-extractivism and a just transition that doesn’t just move from fossil fuels to renewables (with increased mining and sacrifice zones) without system change.

Seán McCabe is the Executive Manager of the TASC Climate Justice Centre. His work at TASC focuses on developing evidence based, people-centred and community-led climate action strategies. Seán also supports the work of the Children’s Environmental Rights Initiative. Prior to joining TASC, Seán worked with former Irish President Mary Robinson in the Mary Robinson Foundation – Climate Justice. During this time he engaged in the negotiation of the Paris Agreement and the 2030 Agenda for Sustainable Development. Beyond Ireland, he has worked on issues of climate justice in India and Sierra Leone.

Watch back on the Comhlámh YouTube channel. #ClimateCrisis #TheFutureIsNow #COP26