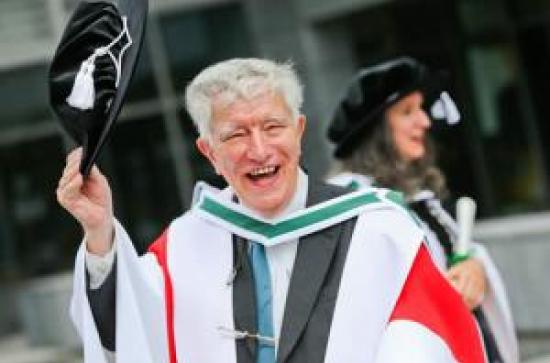 Words spoken at Maynooth on 25.vi.2013 by G.L. Huxley after the Conferring upon him of the Honorary Degree of Doctor of Letters by the National University of Ireland

It is difficult to put fittingly into words the sense of gratitude I have towards Maynooth. The honorary degree awarded by the National University reminds me that for more than half a century I have been the recipient of much kindness from many persons here. Let me mention some of them.

Fathers William Meany and Gerard Watson hospitably entertained my wife and me here in 1963; one outcome of the luncheon was Father Watson’s decision to work for his doctorate at the Queen’s University of Belfast. The resulting book The Stoic Theory of Knowledge is a pioneering contribution to the study of ancient philosophy. Another consequence was that I became a friend of Michael O’Riordan in the Refectory; we are delighted to see him and his wife here today. Michael is the most discreet of men. He will take in due course to the grave much knowledge of the ecclesiastical history of recent Ireland. His long service in Maynooth exemplifies the Irish proverbial command Easc, faic, is fan balbh – listen, look, and be dumb.

Father Watson was a dear friend until his untimely death. When I left Belfast, because it was necessary to be in Dublin to organise the 1984 International Congress of Classical Studies, he arranged a post for me here in Saint Patrick’s. I was delighted to be entitled a Temporary Assistant Lecturer, a designation causing an American friend to remark ‘Boy, those guys are taking no chances’. Another friend has been Monsignor Joseph Spelman: not only has he provided much spiritual first aid over the years at Collooney, but also he invited me to give my first Maynooth mathematical lecture.

The idea of appointing me to Adjunct Professorships in Ancient Classics and in Mathematics came from two more friends – Dr Kieran McGroarty, a pupil of Professor Watson, and Professor Anthony O’Farrell. Their move was a bold one, since I have no formal qualification in mathematics. It is hoped that in my annual Greek and Mathematical lectures I have not let them down. It would be presumptuous to comment upon the work of Anthony, except to say that by general consent he is seen to be a most distinguished practitioner. About Kieran let me say that his book on Plotinus is a fine contribution to philosophical scholarship. He is also a skilled administrator, and I rejoice in the high standing of Ancient Classics at Maynooth within the Humanities of contemporary Ireland.

Here too I must thank Professor Scourfield for his generous words at this morning’s ceremonies and thanks are due also to the President’s Secretary, Vera Timmons, for constant help during our visit. Under the wise guidance of Professor Nolan science and scholarship here, despite hard times, will continue to thrive. I am especially grateful to him for agreeing to match my intermittent efforts to find funds for the Russell Library, a treasure house and one of the glories of Maynooth, and also for honouring me with his presence at some of my lectures.

May I conclude with another Irish proverb, this one first recorded by Ó Longáin in the eighteenth century? There are, the proverb states, four things not to be trusted by an Irishman: adharc bhó (a cow’s horn), crúb chapaill (a horse’s hoof), dranna madra (a dog’s snarl), agus gáire Shasanaigh (and an Englishman’s smile). In Maynooth, however, much trust has been placed in me, and in half a century of friendship there have been many opportunities not only to smile but also to be merry. Thank you all, agus Beannacht Dé libh.