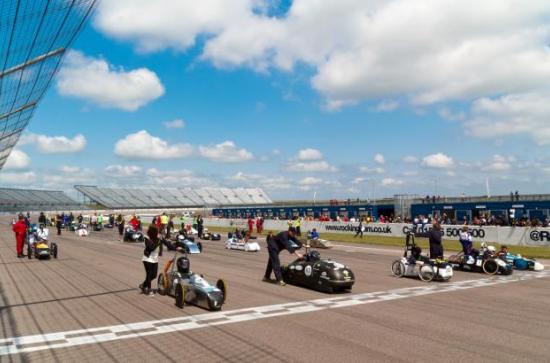 The Greenpower Design, Build, Race challenge celebrates  a new chapter in its development with the first International Finals being held at the Goodwood Motor Circuit on Sunday 12th October 2014. This year's International Final sees 80 teams competing in the secondary school event having qualified at one of our 15 regional heats, where a record 202 teams took part this year.
A team of Transition Year students from Maynooth Post Primary School in conjunction with the Department of Electronic Engineering and Intel, became the first school in the Republic of Ireland to compete in the Greenpower Formula 24 event.
The technical team began work on building the electric powered car at the beginning of March this year in the Engineering Department of Maynooth University. At the same time a PR team of students got busy fundraising and raising awareness of the project in the media.
The aim of the project was not only to build and race the car but also to expose students to the vast world of Engineering.
Preparations for this event began way back on the 18th of February where the President of Maynooth University, Prof. Phillip Nolan, launched the event and help turn a pile of boxes into a racing car!

Early on Saturday 31st of May the students, staff from MPPS and staff from Maynooth University loaded up the car and headed to Nuts Corner in Belfast to race in the GreenPower event.
Having passed all safety and design checks the Wheel Deal lined up on the grid with five other teams for the first of two 90 minute races. The race took place in glorious sunshine with the temperature on the day reaching over 25 degrees!
All cars start the race with the same batteries. The object is to cover as much ground as possible within the 90 minutes and there are no battery changes allowed. The Wheel Deal got off to a flying start getting into pole position within a few meters of the start. The pit team had worked out the driver changes and 25 minutes into the race The Wheel Deal pulled into the pits for their first driver change. Reliability proved to be the key as there were no unscheduled pit stops or repairs required to the car. After 3 excellent pit stops to change drivers ‘The Wheel Deal’ was placed runner up in the overall race but 1st in its class.
After a break of an hour to allow the drivers to rest the second 90 minutes commenced and it was a carbon copy of the first race with The Wheel Deal settling nicely into its lap times and driver changes, coming in 2nd place. A delighted pit crew and team members helped to push the car to the team area as we had used up every last bit of power in the car.

At the prize giving at the end of the day the team were also awarded the Siemen award for Innovation and Design.
We wish them every success at The GreenPower Formula 24 Final at Goodwood race track in the UK on the 12th of October 2014.