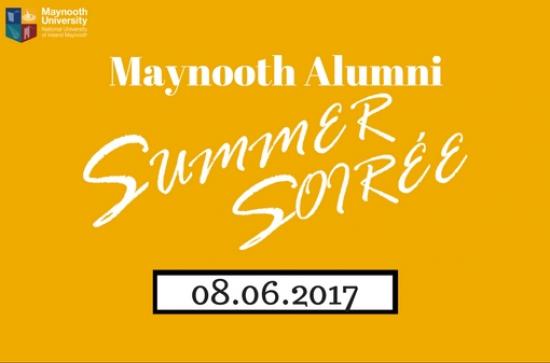 Get your tickets now for this unique alumni event

It’s our 20th birthday this year! In 1997, Maynooth officially became an independent university, but we know full well that the memories and milestones began long before that. Come celebrate this historic chapter—and the start of summer! —with the annual Maynooth Alumni Summer Soirée on 8th June.

Irish film is the theme for this special year. Join Prof Maria Pramaggiore from the Department of Media Studies as she gives a special commemorative talk on 'Cinema and the Three Ages of Maynooth: 1795, 1910 and 1997,' with clips and context about the state of Irish cinema at each of these Maynooth milestones. Following will be guest alumni Denis Clohessy (Class of '95), an award-winning composer for film and theatre, and international soprano Rachel Croash (Class of '09).

Don’t miss this chance to celebrate our 20th anniversary with a special Summer Soirée focused on Irish Film and the music behind it. Beginning with a wine reception at 7pm, invite a friend and get your summer off to a great start with the very best of Maynooth culture. Register now for tickets.