The Victorian Curator who railed against Racism and Imperialism 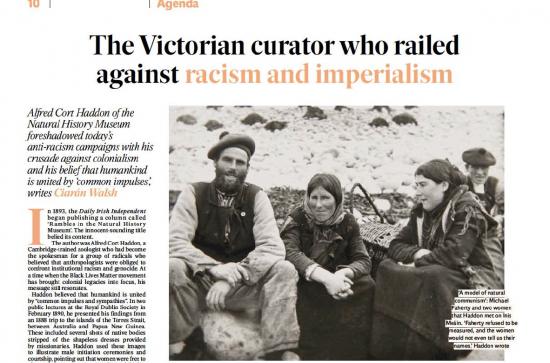 The Victorian curator who railed against racism and imperialism

Alfred Cort Haddon of the Natural History Museum foreshadowed today's anti-racism campaigns with his crusade against colonialism and his belief that humankind is united by 'common impulses', writes Ciarán Walsh in article for the Independent newspaper on 23rd June 2020.

In 1893, the Daily Irish Independent began publishing a column called 'Rambles in the Natural History Museum'. The innocent-sounding title belied its content.

The author was Alfred Cort Haddon, a Cambridge-trained zoologist who had become the spokesman for a group of radicals who believed that anthropologists were obliged to confront institutional racism and genocide. At a time when the Black Lives Matter movement has brought colonial legacies into focus, his message still resonates.