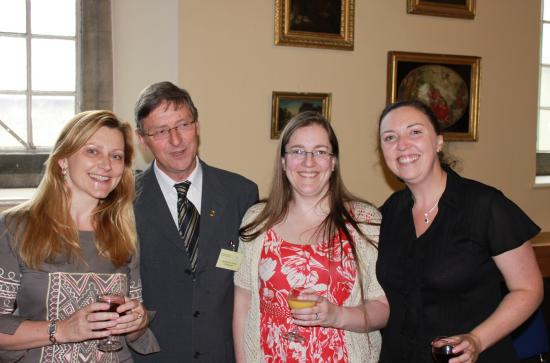 Alumni, staff and conference attendees enjoyed an evening in Renehan Hall to mark the retirement of Professor O'Farrell and acknowledge his contribution to the Mathematics and Statistics Department and the University over the last five decades.

Jointly hosted by the Department of Mathematics and Statistics and the Computer Science Department, the reception and presentation to Tony reflected the high esteem and gratitude of all attendees.  Former departmental staff who joined the celebrations on the evening included alumnus Dr Richard Watson.

Professor Anthony G. O'Farrell, who retired on 30th September 2012 was Professor of Mathematics at Maynooth since 1975.  He was also responsible for the establishment of the University's Computer Centre in December 1975 and ran it for nine months until a full-time director was appointed.  From 1992-1995, he was head of the Computer Science Department.

Check out more photos from this event