Female Trump supporters are viewed through misogynistic lens – even by feminists 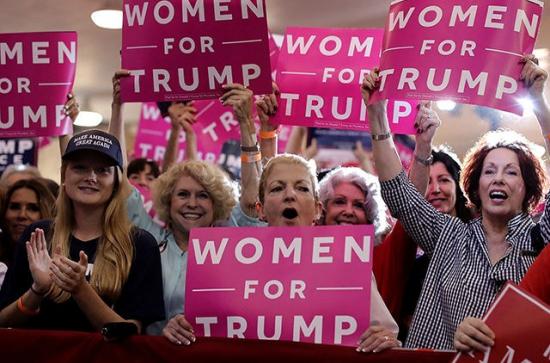 Female supporters of US President Donald Trump are often dismissed as having voting against women, and have been subject to heavy amounts of criticism through traditional media commentary and social media – and from high profile celebrities and public figures.

A common accusation is that the women that supported and voted for Trump did so because of internalised sexism. However, this notion of female Trump supporters as being ‘internally sexist’ could be understood as a form of sexism in and of itself, according to Dr Sarah Arnold, Maynooth University Department of Media Studies, speaking in advance of her upcoming talk to the Society for Cinema and Media Studies Conference,  14 - 18 of March, Toronto, Canada.

Her paper, “Internalised Misogynists”: Language of Oppression and Female Trump Supporters is one of three to be presented as part of the panel, and will examine the way outdated concepts of female agency have been used within media discourse to characterize women who are Trump supporters.

In her paper, she examines the way high profile liberal celebrities and media commentators like filmmaker Michael Moore, actress Lena Dunham, Madonna and others have employed regressive ideas of gender in reference to women who support Trump, often dismissing their agency and accusing them of irrationality.

Dr Sarah Arnold comments, “The type of language being used to characterise female Trump supporters is often the same language of oppression that feminists have long criticised. Words like ‘irrational’ and ‘hysterical’, which are now being used by high profile figures to describe women that support Trump, reduce women to beings incapable of forming their own opinions and voting rationally.”

During his presidential campaign and since, Donald Trump has been repeatedly accused of misogyny in his attempts to undermine both Hillary Clinton’s presidential bid, and other women that opposed him.

One of the most high-profile examples of this is when he remarked that broadcaster Megyn Kelly had ‘blood coming out of her wherever’ after she challenged him during a televised GOP presidential debate in 2015, dismissing her questioning of him as merely a result of menstruation. While Trump denied that this was his intention, the incident was seen by feminists and the left wing as being typical of his misogyny and how his campaign belittled women.

However, Dr Arnold argues that Trump’s opposition can also be dismissive of women and their individual viewpoints. In her 2017 book, What Happened, Clinton asserts that white middle class women voted against her because they were under pressure from the men in their life not to vote for ‘the girl’, rather than being genuinely opposed to her.

Dr Arnold says that by reducing Trump’s female supporters to being irrational and just internally sexist, or for that matter having their voting choices dictated by the men in their lives, “there is a danger of perpetuating this same dismissive view of women, in which their political beliefs are merely a result of biology and perceived female weakness.”

The potential consequence of this, says Dr Arnold, is a ‘divide and conquering’ of women, holding back the struggle for gender equality.

“We could find ourselves in a position in which women are divided by party political lines, with one group of women essentially acting as the gatekeepers of feminism and dismissing those with different political beliefs entirely rather than engaging in meaningful dialogue about where their opinions have come from.”

“This acts as a distraction from the goal of feminism, which should be to ensure that all women, regardless of their background and political opinions, have access to social and political equality and progress.”

The Society for Cinema and Media Studies Conference is the largest film and media conference in North America, welcoming up to 3000 scholars from 38 institutions from around the world.

Dr Arnold’s presentation is part of a wider panel that will address gender in Trump’s America across a spectrum of media platforms and contexts, titled Trump’s Women: Gender, Affect, and Agency in Contemporary US Media Culture.