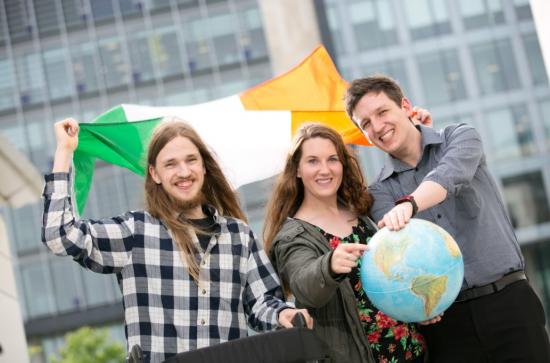 Access Earth, an app designed by students of Maynooth University, has been selected to compete in the Microsoft Imagine Cup 2014 World Finals in Seattle later this summer.

Access Earth allows people to make an informed decision on whether or not a building is wheelchair accessible by providing information on facilities including ramps and wheelchair accessible toilets alongside an overall building accessibility rating. It does this by harnessing the local knowledge of volunteer networks across the world to catalogue individual building’s mobility points.

Team Access Earth is among only 35 teams to be selected from a total of 170 semi-finalists from 72 different countries to compete in the finals.  The team has been nominated for the ‘global citizenship’ category, a category that recognises those who have demonstrated an innovative application of technology for social good.

This is Access Earth’s second time competing in the Microsoft Imagine Cup, having finished runners up in Ireland in 2013.

Commenting on their nomination, Access Earth team member and Maynooth University Post Graduate student Matthew McCann said: “We are extremely excited to be nominated for the Microsoft Imagine Cup World Finals.  The idea for the Access Earth app came about after I travelled over to the 2012 London Olympics and the hotel I booked into had advertised itself as wheelchair accessible.  Upon arrival I quickly learnt that this was not the case.  There were three steps up to the hotel entrance, no ramp and many of the doors were too narrow to be navigated by a wheelchair.  As someone with cerebral palsy this lack of accurate information is something I have become accustomed to over the years, and I knew I wasn’t alone in this respect.”
“During my time studying computer science in Maynooth University, our professors always placed a great emphasis on the practical application of our programming skills for problem solving and entrepreneurship.  Based on my experience, my team mates and I recognised the need for a practical app like this for the disabled community and having spent the last two years developing and testing the product, we are thrilled to be afforded the opportunity to showcase the app at the Imagine Cup Finals in Seattle this July.”

Tom Lysaght, Acting Head of the Department of Computer Science, Maynooth University stated that “ Maynooth University is delighted to see its students recognised at the Microsoft Imagine Cup Finals.  This is the fourth time in eight years Maynooth University students have been selected to represent Irish universities at the finals and this is testament to the great emphasis Maynooth University place on encouraging students to apply the skills they learn in the classroom to innovation in the outside world.  The Access Earth team therefore deserve huge credit for their hard work, creativity and vision in designing an app that has the potential to make such a significant difference in the lives of so many.  These attributes combined with their true entrepreneurial spirit will stand to them as they graduate from Maynooth University and embark on the next stage of their careers.”