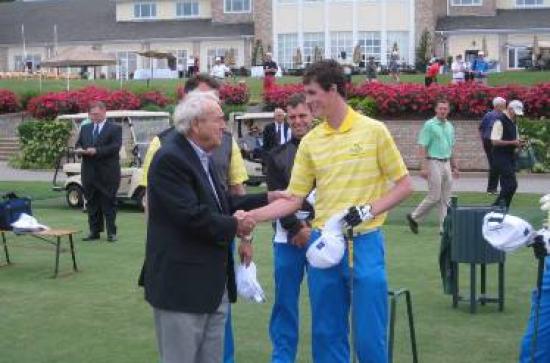 Harrington Golf Scholar at  Maynooth University  - Gary Hurley (2nd year Business & Management) has been invited to compete and represent  Maynooth University  in the third annual Patriot All-America Invitational to be held on December 29-31, 2013 at The Wigwam Resort in Litchfield Park, Arizona, USA.  The event also know as Golf's “Bowl Experience” is a 54 holes amateur stroke play event and has an "A" rating from the World Amateur Golf Ranking, now recognised as one of the top 35 tournaments worldwide by elite amateur golfers.

The field for the Patriot All American Tournament is limited to eighty four players and invitations are primarily based on the following grounds: individuals earning PING All-America honours the previous season in NCAA Divisions I, II and III as well as the NAIA and NJCAA Divisions I and II. Additionally, a member from the United States Military, Naval and Air Force Academies are invited as well as GCAA national award recipients, members of the most recent Palmer Teams, AJGA All-Americans and Toyota Junior Golf World Cup participants currently enrolled in their freshman year of college.

It is tradition that each participant represents a fallen military service member with their golf bag emblazoned with the name and branch of service of a military member. Golf bag sponsors PING have created a uniquely Irish bag for Gary to honour the war veteran a fellow native of Hurley’s from Dungarvan, Co. Waterford. At the conclusion of the event, participants golf bags will be auctioned by the respective athletic departments of participating students - athletes with all proceeds designated for the Folds of Honor Foundation.

Details of the Paddy Harrington Golf Scholarship at Maynooth University can be found here.