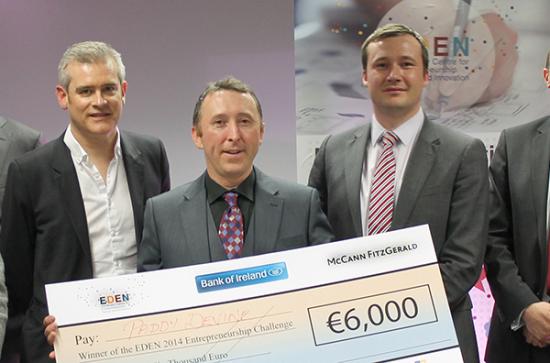 May 13th saw the final of the Maynooth University Student Enterprise Competition where the top four aspiring entrepreneurs were put through their paces in front of an expert panel to determine how €10,000 prize-money would be distributed.

The Winner – Brakes 4 Kids
Emerging from 90 entries, first place in the 2014 Enterprise Tournament went to mature student, Paddy Devine, graduating from this year's Product Design BSc programme.  Paddy is a father of three who couldn’t help noticing that as each of his kids got their first bike and learned to cycle; their little fingers lacked the dexterity to operate conventional handlebar brakes.  Hence, kids use their feet, scuffing their shoes and risking injury in trying to get their bikes to stop.  Paddy has developed a solution to this problem.  The judges, including Conor Boyce, one of the country’s leading Patent Attorneys, were extraordinarily impressed with this idea; considering it to have worldwide potential and urging Paddy to waste no time in working it up to a commercial proposition.  Paddy will use the prize-money to incorporate a company and intends to devote himself full-time to the commercial exploitation of this idea.

Second Place – Moodley Manor
Vegans and those with lactose intolerance or dairy allergy are currently unable to eat pizza or any other dishes traditionally associated with cheese.  Moodley Manor is a non-dairy synthetic cheese. Second year student Gavyn Pedley is currently dating a vegan and he has found it impossible to find exciting vegan options when dining out.  Gavyn started experimenting with home batches of various non-dairy ingredients and hit on a formula that has the right taste and mouth feel to be added to pizzas or even salads.  Even though he developed the idea for this competition, he has already secured the technical and financial support of two state agencies to help him develop the product: Teagasc and Enterprise Ireland.  Gavyn will be using the Enterprise Tournament bursary to engage in market research and brand development.

Third Place – College Spots
Students and staff in Maynooth and other 3rd level colleges are frequently exasperated by the parking facilities.  There are loads of car parks and spaces but they’re spread over two campuses and you can never tell, especially, in times of high demand if there are any spaces available and precisely where they are. Through this idea, sensors would be placed at the entry and exit of each of Maynooth University ’s 8 car parks and they would feed the information in real time to an app which would allow drivers go straight to precisely where the free parking spots are.  Maynooth is merely the pilot for this idea, the team of Kyle Treacy and Brendan O’Neill intend to quickly scale up and bring the idea to other colleges and large corporate car parks.

Fourth Place – Automeasure
Iain Keaney is a final year PhD student in engineering.  Imagine if by simply photographing something with your mobile phone that it could convert the digital photo into a series of technical drawings complete with measurements.  This is an idea for designers, surveyors, architects and home-improvers.  The judges loved this idea but thought that it there were a number of technical issues that needed to be resolved before it could legitimately expect to get to market.  Nonetheless, this has the potential to be a truly groundbreaking idea and EDEN will be working with Iain to drive it forward as soon as Iain’s PhD is complete.

There were 90 entries to this year’s competition; triple that of prior years. Students entering the competition were enrolled in a series of 5 evening workshops, helping to develop a business model, create a tangible, testable concept; identify commercial assumptions and realistic projections, learn visual thinking and sketching to enhance their creativity and finally, learn how to make the perfect pitch.

According to Peter Robbins, Centre Manager for EDEN, “Part of the role of EDEN is to develop a university-wide community of bright people with smart ideas – and to help them convert their ideas into action.  The student enterprise competition is a wonderful way of sending a depth charge through the university to flush out people with ideas who might want help in bringing them to fruition.”

Organised by EDEN, the University’s Centre for Entrepreneurship, Design and Innovation, the Student Enterprise Competition, is jointly sponsored by McCann Fitzgerald and Bank of Ireland.

Reflecting on the final, runner-up and 4th year PhD student Iain Keaney said: “I personally found the journey the competition took me on to be worth far more than the total prize fund.  This really could not have been more timely as I finally leave the student life and enter the professional world as it has given me a new understanding of what is required to bring a project from that initial crazy notion and turn it into something very real.”

Speaking after the final, the judges commended the participants for their fresh, original ideas and acknowledged the high degree of energy, insight, optimism and enthusiasm that has gone into each of the entries.  Bank of Ireland’s Noel McCluskey commented that “each participant was a credit to themselves and to the University.  The entry level of 90 speaks volumes for the entrepreneurial spirit in the University. I suspect there will be many success stories to come from these entrants both in the final and outside it.”

Dr Frank Devitt, head of the Department of Design Innovation said that “the diversity of the backgrounds of all the participants was especially pleasing. There were participants from all faculties in the university, ranging from 1st year undergraduate students to 4th year PhD students. Even after a threefold increase in participants for the present year, we still hope to double that number in next year’s competition.”