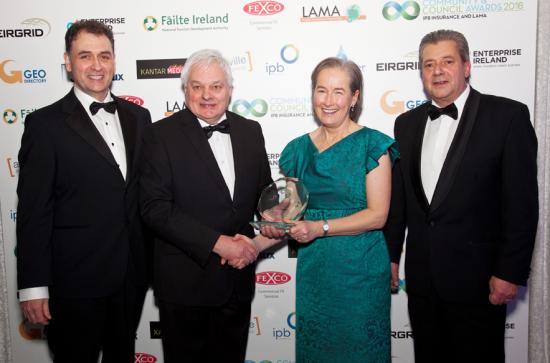 The Eolas building was nominated and submitted by Kildare County Council to represent Kildare in the 2016 Local Area Members Association awards(LAMA).
It won an award for the Best Educational building 2016. The award recognises and celebrates community and councils working together and was a recognition of the positive collaborative relationship between Coady Partnership Architects, the Campus Planning and Development office at Maynooth University and the members of Kildare County Council.​

In attendance was John Treacy, Treacy Brothers Ltd, Anne Fletcher, Coady Partnership Architects and Finbarr Horrigan, Director of Campus Planning and Development.Councillor Frank Flynn presented the award on behalf of Kildare County Council. This is the second award for the Eolas building project. The building also received an Excellence in Construction award for Great Britain and Ireland in 2016. Congratulations to all who contributed to an additional high caliber project for Maynooth University. ​