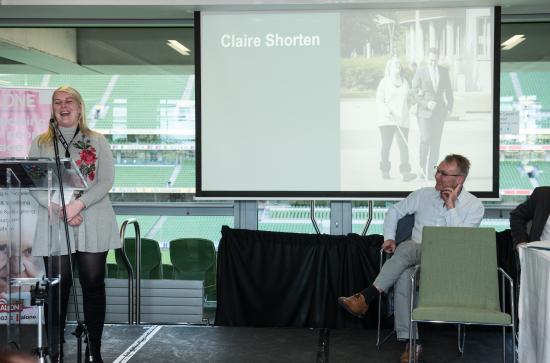 Only 10% of population who need support can access it

Maynooth University today announced the launch of the ALL (Assisting Living and Learning) Institute – a multi-disciplinary and collaborative centre for the development and promotion of Assistive Technology and Supports for people, especially those marginalised through disability or impairment, enabling them achieve well-being at all stages of their lives.

It is led by Malcolm MacLachlan, Professor of Psychology and Social Inclusion at Maynooth University, who is also Research and Innovation Co-ordinator for the World Health Organisation (WHO’s) Global Cooperation on Assistive Technology (GATE) programme.  Speaking at today’s FreedomTech national assembly at the Aviva Stadium he raised concerns that Ireland is not moving fast enough to assist our people in this regard.

Professor MacLachlan stated: “Sadly, people with disabilities are not being prioritised by the government. In March 2017, Ireland reached the 10-year anniversary of signing the Convention but has failed to ratify it. Ten years is too long to deny people their human rights, to deny citizens of their human rights.

“The Irish government’s policy aspirations outlined in ‘Progressing Disabilities’ and ‘New Directions’ call for a fundamental rethink and new infrastructure for assistive technology in Ireland. With longer-living populations, there is a clear need to embrace the concept of ‘assistive’ – assistive services and assistive independent living will become the defining features of life over the next few decades.”

The World Health Organisation (WHO) estimates that one billion people with some form of impairment could benefit from the use of an assistive product, yet only 10% of people around the world currently have access to such products. By 2060, an estimated two billion people would benefit from access to assistive technology systems. The European Disability Strategy 2010-2010, approved by the European Commission in 2010, aims to foster an EU-wide market for assistive technology.

Professor MacLachlan also has said that the potential to use technology to help people break into society is both immediate and considerable.

He said Ireland has a research, development and production tradition in assistive products that now presents significant opportunities for scaling, providing European and global leadership. Despite this potential, Ireland is inadequately served by assistive technology at the systems, organisations and provision levels; and users have insufficient say in assistive product use and development.

Professor Malcolm MacLachlan stated: “Assisting Living refers to helping people who may be challenged by disability, chronic illness, frailty or cognitive decline, impairments that may be associated with aging; or those marginalized from the benefits of mainstream society; to benefit from equitable application of technological, personal, community and societal initiatives that assist and enable them to live a full life as valued participants of their community.

“Assisting Learning refers to applying this ethos to removing barriers to accessing and benefitting from education – especially third level education.

“Assisting Living and Learning’s emphasis on interdisciplinary, widening participation and social inclusion is well aligned with both the previous and emerging Maynooth University Strategic Plan. The Maynooth Access Programme is a national leader in promoting access to third level education. We are committed to a systems approach in all areas of our work, which means understanding the interplay of various factors that influence the relationship between persons and their contexts, between persons, and between technology and the person using that technology.”

Commenting on the launch of the ALL Institute, Maynooth University Vice-President for Research, Professor Ray O’Neill said: “We are committed to responding to the most important and sometimes the toughest questions for society. Enabling every person to achieve their full potential is an important goal and we hope that the work of the ALL Institute with its unique interdisciplinary focus can make a strong contribution in this regard. We are the national lead in diversity in education and have long been recognised for our commitment to inclusivity at all levels and I look forward to seeing the progress of the Institute in the coming years.”