The partnership between the Epithelial Immunobiology Lab (led by Dr. Shirley O’Dea, Maynooth University), the Fluids and Heat Transfer Group at Trinity College Dublin (led by Dr. Tony Robinson and Dolomite has been created to address the potential of electrospray as a novel drug delivery method. The project will research a novel process involving electrospray to deliver biomolecule-based drugs into cells. This action represents a high level collaboration between partners with complementary expertise in biological drug delivery, mechanical and manufacturing engineering and microfluidics technologies. The problem will be tackled by researching the parameters that influence electrospray generation and its ability to successfully deliver active biomolecules into cells. In this IAPP project, we aim to increase understanding of the physical processes involved in electrospray generation, to develop the technology and to determine its potential to deliver a wide range of biological molecules into cells.

Electrospray is a process where a high electrical charge is applied to a fluid in order to generate a very fine spray composed of nano-sized particles. A solution is passed from a syringe to an emitter, when no electrical charge is applied the liquid forms a pendant droplet. When a high voltage is applied to the emitter an electrical field forms between the emitter and grounded plate and distorts the droplet into a Taylor cone. When the energy from the electric field overcomes the surface tension of the solution, the solution breaks up into charged nanoparticles, forming a fine spray. 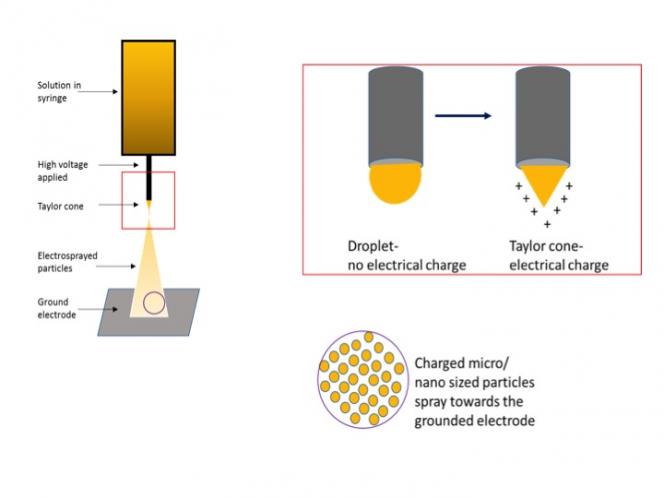 Figure 1: The electrospray process. A high voltage is applied to a solution at the emitter tip. A Taylor cone is formed and the surface tension is overcome by the electric field and the solution breaks into charged nanoparticles moving towards the grounded electrode.

There are many applications of electrospray technology including chemical deposition, electronics and colloid thrusters among others. More recently, the process has been applied to areas of biology such as protein mass spectrometry, as well as dispensing and depositing biological material during tissue engineering and in the production of protein microarrays. However, the fundamental processes underlying electrospray formation are poorly understood, limiting full exploitation of the potential of this phenomenon. We have developed a novel electrospray system which we have successfully used to demonstrate a novel application of delivering biological molecules into cells such that they remain functional within the cell. This technology holds substantial potential as a novel drug delivery method.

Figure 2: a) Electrospray equipment set-up. Taylor cone illuminated with b) bright light to identify a stable Taylor cone and c) a laser to highlight the plume of particles.

This project has received funding from the European Union’s Seventh Framework Programme for research, technological development and demonstration/ ERC under grant agreement no PIAP-GA-2009-251349 TaylorMed