The SPUR programme at Maynooth University provides undergraduate students with the opportunity to engage in a six-week department-based research project. The objective of the programme is to gain insight into the world of research and postgraduate study, develop networks and enhance personal and professional development. Participants earn a stipend as part of the programme. The Arts and Humanities Institute hosted the 2018 SPUR programme. The project, entitled, Prototype, Digital Archive of Maynooth College Students and Ordinations (1795-2017) completed by second-year computer science students Jesse Ashmore and Joseph Fahy. The project was a collaboration between the Maynooth University Computer Science Department and the Maynooth University Arts and Humanities Institute. The objective was to develop a prototype digital archive of Maynooth College students and ordinations over the past 200 years. The digital archive is composed of biographical data of students married with visual data from their respective ‘class pieces’ (i.e. formal photographic record of ordination classes, professionally prepared and presented to the College by successive graduating classes). Over the six-week SPUR programme, a powerful contextual database was populated from the archives generated from various sources. The two principle sources were the ‘class pieces’ (a sample from the 1970s) and prosopographical information on approx. 10,000 Maynooth students, originally collated by Patrick J. Hamell (1982). Tools were developed to accelerate this archival process. These tools bode well in the context of continuing the project, pending new funding. Interactive visual representations of the database were created. These include a search engine for the records, a dynamic map of the students’ origins and an explorable interactive ‘virtual class piece’. The scope of the project limited the amount of data that could be ingested. As a result, the time available was devoted to developing flexibility of the server and tools  to allow for larger-scale projects to draw on the foundations of this prototype. 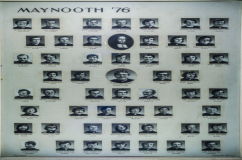 The Irish abroad have been important as political reality, economic presence, cultural force and historical construct. Recent research has facilitated the reintegration of the early modern diasporas into the mainstream of Irish historical studies. A crucial element of this process has been the collection of data by dedicated researchers and the publication of their results. Since its inception in 1997, the Irish in Europe Project at Maynooth University (MU) has fostered research into early-modern Irish migration to the Continent. It has organised five international conferences, published five volumes of conference proceedings and built up a network of researchers and collaborators.The Project also manages a rich variety of biographical data on Irish migrants, kindly made available by colleagues in Trinity College Dublin, Oxford, Toulouse, Leuven and Madrid universities and by individual scholars. Contributions include Laurence Brockliss (Oxford) and Patrick Ferté’s (Toulouse) data on Irish university students in France; David Bracken’s (MU) material on Irish hospital patients in France; Joren Nilis’s (Leuven) data on Irish students in Louvain; Patrick Ferté’s data on Irish medical students in France and Trinity College’s Centre for Irish Scottish Studies’ data on Irish regiments in eighteenth-century France and early modern Spain, compiled by Colm Ó Connaill (TCD) and Oscar Recio Morales (Madrid). Thanks to a 2007 Irish Research Council grant, the data was cleansed, modelled, ingested into an XML database and web hosted. This project was led by Thomas O’Connor (MU history), Marian Lyons (MU history) and John Keating (MU Computer Science). The VRE is currently under reconstruction and will be accessible again in the near future.

The Letters of 1916 project was the first public humanities project in Ireland. It created a crowd-sourced digital collection of letters written around the time of the Easter Rising (1 November 1915 – 31 October 1916). The project included letters held at institutions (in Ireland and abroad), alongside those in private collections. To date, over 2,230 letters that comment on the Easter Rising, literature and art, the Great War, politics, business, and ordinary life have been collected. The website for the project can found at the following link.