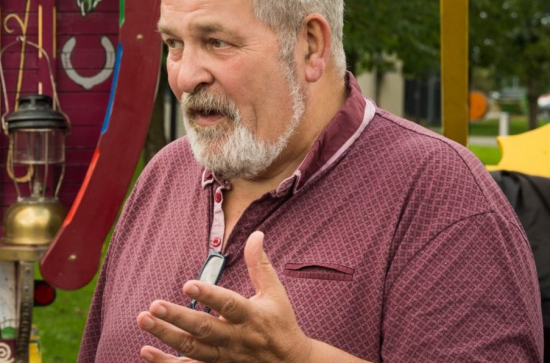 It is with regret that colleagues at DAPPSS learned about the recent passing of Michael McDonagh, an early graduate from the professional community and youth work programmes and long-time friend of and contributor to DAPPSS and Maynooth University. Below, we reflect on just some of the contributions he made during his life. Michael McDonagh was an internationally acknowledged Traveller leader, community worker, and community historian and expert on traditional crafts, customs and skills Michael's untimely death on September 18th is a huge loss for his wife Nell, their children, grandchildren, and larger family network. It is also a major loss for Travellers and Traveller organisations and for all who stand in solidarity with their struggles for recognition and rights realisation in Irish society. Michael McDonagh was one of the Traveller leaders who led the negotiations with the state which culminated in the public acknowledgment of Traveller ethnicity by then Taoiseach Enda Kenny in Dáil Éireann on March 1st, 2017. He was long-time director of Navan Travellers Workshop. In addition, over the past number of years, Michael made a very significant contribution to enhancing Traveller pride in culture and identity, while building awareness and understanding among non-Travellers, though Traveller history workshops and associated presentations at festivals, fairs and museums up and down the country. In 1989, Michael was one of the first of many Travellers to graduate from DAPPSS with a professional qualification in Community and Youth Work. He remained a close and much valued friend to the Department and the University - supervising student placements, contributing to classes and making keynote inputs to University events, including the public lecture ‘Travellers in Irish Society, Past and Present’ hosted by the MU Access Office in 2019, where the accompanying photo of Michael was taken. What Michael stood for, and what the other Traveller graduates of MU continue to stand for, in promoting rights realisation and equality needs to continue to be reflected throughout all the University's programmes, as well as in its governance, students and staff and the research, teaching and all the other activities of the academy. We are all indebted to him and the wiser for having had the chance to engage with him. Ar dheis Dé go raibh a h-anam.