Click on the tabs below to view details about each seminar. 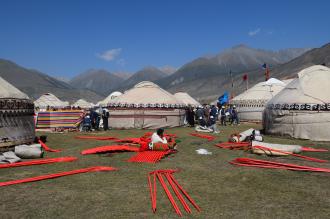 'Recognizing Uniqueness? The World Nomad Games and the Troubled Quest for Recognition’

This paper focuses on the predicament of recognition: the impossibility to fully square one’s own sense of uniqueness with the need to have this uniqueness recognized by others. The World Nomad Games provide a particularly useful lens to explore this predicament. Organized biannually since 2014, with the aim of putting Kyrgyzstan on the world map, by 2018 it attracted athletes, spectators, and commentators from dozens of countries. But if the aim was to celebrate cultural uniqueness, how was this aim compromised by the need to be seen? And what is it that the observers actually saw? By taking on these questions, this paper reflects on the fear of irrelevance in our complex world, as well as on the treacherous line between recognition and ridicule.

Bio
Mathijs Pelkmans is associate professor of anthropology at the London School of Economics and Political Science. His long-term fieldwork in Georgia and Kyrgyzstan resulted in the monographs Defending the Border and  Fragile Conviction. The title of the latter reflects his ongoing preoccupation with the instabilities of knowledge, as also seen in his edited volume Ethnographies of Doubt, a forthcoming special issue on Willful Blindness, and his current project on the 'Predicament of Recognition'. 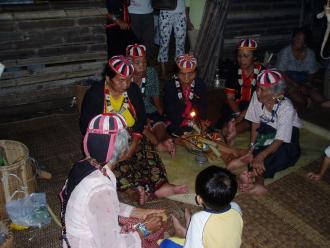 "Witnessing the unseen? On extinction, spirits, and anthropological responsibility"

In this paper, I draw on two research projects—one on orangutan conservation, and the other on religious change among indigenous Bidayuh communities (Sarawak, Malaysian Borneo)—to reflect on the relations and processes involved in producing both witnesses and witness-able truths. I compare two forms of witnessing—dominant visualizations of environmental crisis and extinction on the one hand, and ways of encountering spirits, deities, and other invisible entities among Bidayuhs on the other. Both involve a knotty challenge: how to make that which cannot be seen visible or somehow knowable, and thus addressable. I argue that the first entails a crisis-laden visual imaginary that treats witnessing as a form of human stewardship over the environment. Conversely, the second involves a more relational encounter in which witnessing and bearing witness are the outcome of commitments and obligations shared by both humans and nonhumans. I suggest that this latter mode of witnessing can help ‘slow down’ the crisis logic of environment visualizations, pushing us to ask what is rendered both visible and invisible in witnessing processes. Finally, I contemplate what the juxtaposition of these two modes of witnessing can bring to ongoing conversations about the roles and responsibilities of the anthropologist as witness.

Bio
Liana Chua is Reader in Anthropology at Brunel University London. She has worked with an indigenous group in Malaysian Borneo since 2003, looking initially at religious conversion and ethnic cultural politics, and later at development, resettlement and environmental transformation. She currently leads an ERC-funded project, Refiguring conservation in/for ‘the Anthropocene’: the global lives of the orangutan (GLO), which explores the social, political, affective, and aesthetic dimensions of orangutan conservation. Her other research interests include visual and material anthropology, anthropology of the body and anthropological knowledge-practices and politics. 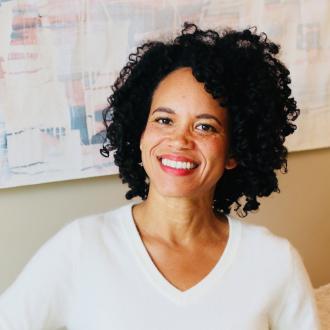 "The Faces and Facets of Belonging: The Seen and the Unseen in Scientific Visions of Genetic Human Difference" 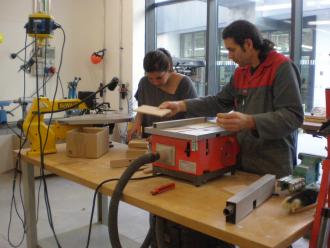 "The Designer’s Apprentice: A Semiotics of Learning and Making in Design Practice"

This paper will explore the dynamics of apprenticeship, technology and aesthetics experienced by students from a Faculty of Design located in northern Italy. My analysis is based on a one-and-a-half-year ethnographic study of the learning processes undertaken by design students within the spatial environments of the Faculty. These environments appear to be structured according to a relationship – sometimes contractual and sometimes conflictual – between places of design project and places of design implementation. These two different kinds of space – respectively called ateliers and workshops – are indeed managed by different professional figures, namely academic staff and technical staff, who interact with ‘apprentices’ engaged in planning and realising design prototypes, often in full-scale. In this paper I will show how design learners move across these spaces, by undertaking notable operations of translation between forms, models, measurements, materials, often through complex processes of adjustment. Through a semiotic and anthropological analysis of these operations, and of the interactions between learners, academic and technical staff, and the “material scene”, I will try to demonstrate how: (1) the design artefact emerges as the result of a negotiation (Yaneva), yet an ‘asymmetrical’ one; and, (2) how the design activity itself could be better understood as an ‘aesthetics of everyday life’, bringing about processes of redefinition of body and subjectivity through senses, affection and materiality.

Bio:
Dr Tatsuma Padoan is Lecturer in East Asian Religions at the University College Cork, and a research associate at SOAS, University of London. As an anthropologist and a semiotician, he has worked on ritual – including asceticism, ritual apprenticeship, pilgrimage, religious materiality and spirit possession – as well as on the study of design practices and the politics of urban space. His monograph Towards a Semiotics of Pilgrimage: Ritual Space, Memory and Narration in Japan and Elsewhere is forthcoming for DeGruyter. 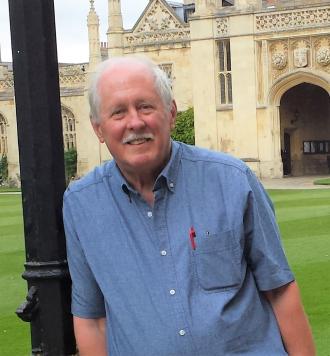 "Anthropological Practice, International Development and the Future of the Discipline"

Anthropological practice is work done by anthropologists operating outside the academy. One
of the more important and visible types of practice work occurs in international development.
I’d like to trace the growth of practice in anthropology, and to do so with particular reference
to anthropology’s involvement with international development. I’d like to highlight what I
think are three key aspects of the current situation: tensions and differences in perspective
between academics and practitioners; anthropology’s influence (or lack thereof) on how
development is done; and where anthropology might need to go in the future if it wants
to contribute to confronting global grand challenges. 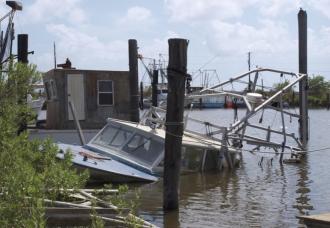 "Masculinity and Disaster in Southern Louisiana"

By conceptualising the recovery from Hurricane Katrina and the Deepwater Horizon/BP oil spill as forming part of ongoing processes of “becoming” and the everyday, this seminar shall explore how the relative power of a historically privileged group of white males in rural Plaquemines Parish, Louisiana, faced significant challenge. Firstly, through the breakdown of informal racial segregation in local social institutions, and through the newly ubiquitous nature of mobile homes threatening their rejection of “trailer trash” culture. While secondly, through the impact of ongoing changes across wider American society, where a locally valorised ideal of normative 1950s culture conflicted with the civil rights and feminist movements of the late twentieth century, and has manifested in support for the political rhetoric of Donald Trump.

“How I discovered the rise of the populist right by looking for something else: reflections on class, culture, and right wing populism” 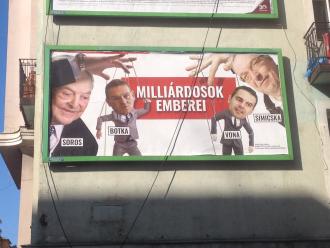 His books include Expanding Class: Power and Everyday Politics in Industrial Communities, The Netherlands, 1850-1950 (Duke University Press), 1997; The Ends of Globalization. Bringing Society back in, (Rowman and Littlefield Publishers), 2000; Globalization and Development: Key Issues and Debates (Kluwer Academic Publishers), 2004; Critical Junctions: Anthropology and History beyond the Cultural Turn (Berghahn), 2005; Headlines of Nation, Subtexts of Class: Working Class Populism and the Return of the Repressed in Neoliberal Europe, (Berghahn) 2011; Anthropologies of Class (Cambridge U.P), 2015. World Wide Mobilizations: Class Struggles and Urban Commoning (Berghahn), 2018. He is Founding Editor of Focaal – Journal of Global and Historical Anthropology and of FocaalBlog

"Anticipating the Nicaragua Canal: Indigenous rights and the unpredicatable future of an infrastructure mega project" 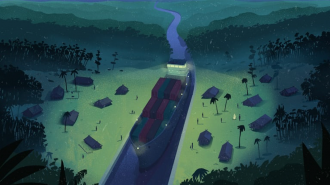 Global challenges and local truths: Anthropology as a hub for interdisciplinarity 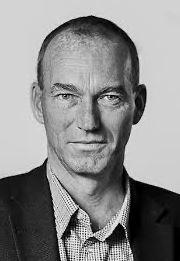 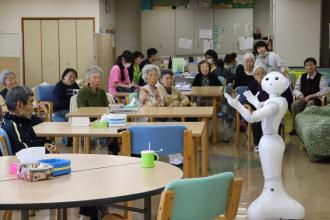 Japan’s population is ageing rapidly, and the country faces a large and growing care labour shortage. In response to the current and future challenges of providing eldercare, the Japanese government has invested in the development of various types of robots as an alternative to large increases in migrant care labour, particularly from Southeast Asia. Stories about Japan’s love of robots and their ubiquity in Japanese society are well known – but are they true? Can robots really substitute for human care workers? And will they replace the apparent need for migrant workers, in Japan and elsewhere?

As governments in the UK and across several countries in Europe seek to reduce levels of so-called “unskilled” immigration, including that of social care workers, it is increasingly important to learn lessons from Japan about the actual capabilities and limitations of technological alternatives. In this talk, I will discuss findings from 7 months’ fieldwork at a care home in Japan that was introducing three different care robots while actively trying to recruit local and migrant care workers.

The Crowding of Clutter: Possessions, Heterochrony, and Congestion in U.S. Domestic Life

"Illusion: an Ethnographic Introduction to Pierre Bourdieu's Anthropology of Viability"

"Ascriptions of dependence at a Papua New Guinean university"