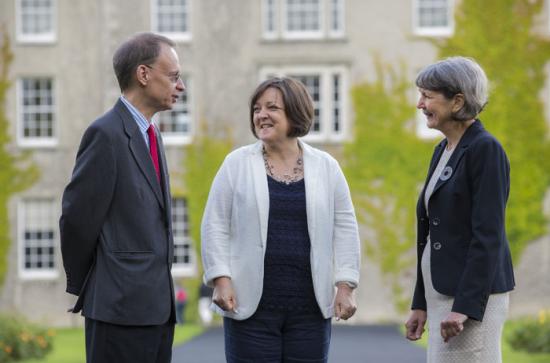 The fourth annual Maynooth Education Forum today heard from two leading international experts that Irish teachers should be given a central role in the assessment of their students at Junior and Leaving Certificate.  The Forum heard that by empowering teachers to make professional judgements we can shift the culture of assessment towards a model that is tailored to each student and, significantly, promotes skills and competencies that are highly sought after by modern businesses.

For Professor Val Klenowski, Queensland University of Technology, the expertise of teacher’s professional judgements need to be taken seriously to meet the learning needs of students in a changing world.  The skills which are vital to thrive in the modern world such as critical thinking, problem solving, the ability to work well in groups, creativity, innovation, and communication, are being neglected by the current system of mass assessment and testing.

This system focuses on the indicators of achievement such as grades and test results ahead of practical skills.  The effect of this can be seen in the eventual job readiness of graduates with a 2015 GradIreland survey showing 52% of Irish companies are having problems finding applicants with the correct skills to fill graduate positions.

Speaking at the Education Forum, Professor Klenowski said: “With teachers taking an active role in designing their own assessment models based on a core syllabus you take into account the fact that different schools have different needs.  It allows for a diverse range of assessment to be practised – whether that consists of in-class essays, assignments, or presentations— that not only reflect the different ways in which students can demonstrate their learning but also more successfully fosters a practical skillset which will serve them moving forward into college and into their professional lives.”

“In Queensland we have a system of assessment in which teachers are at the centre and where schools are trusted to arrive at a reliable decision about a student’s achievement.  A teacher’s understanding, their sense of responsibility, and their commitment to the effective delivery of educational experience for their pupils is significantly enhanced when they are permitted to take ownership of assessment,” she added.

Professor Klenowski emphasised the importance that parents, teachers, school leaders, union representatives, academics, and students are all involved in the discussion surrounding assessment.  The rationale for a shift needs to be fully explained and the research evidence which justifies it must be clearly laid out.  “Changing an assessment culture occurs slowly and incrementally.  Teachers and school leaders will require a lot of support in terms of professional development to facilitate the shift,” observed Professor Klenowski.

At the heart of the ongoing controversy over assessment is the notional fairness of the system of mass assessment.  The current debate over the reform of the Junior Cycle, which involves a move towards school based assessment, centres around the ability of teachers to be objective when it comes to making judgements about their students.  For Professor David Carless, University of Hong Kong, this pervasive distrust is an incredibly damaging feature of the Irish education system.

Speaking at the Education Forum, Professor Carless said: “Societies that trust teachers have significantly less need for standardised testing.  In recognising that teachers are professionals and empowering them to make fair and informed judgements about a student’s achievement of targets set out in the curriculum, we can create an assessment model which is far more flexible and reflective of what students take away from their learning experience.”

Professor Carless was speaking on the importance of implementing sustainable feedback as part of the assessment process.  Sustainable feedback involves students actively giving and receiving feedback on their own work and the work of their peers as part of developing a capacity to monitor their work in progress.

As Professor Carless explained, sustainable feedback is best implemented in a teacher assessed education model: “Feedback needs to be seen as an integral part of course and assessment design and not an afterthought once homework, assignments, or tests are submitted.  This works best when teachers are assessing their own students, as it is a complex interpersonal communication requiring a certain amount of faith and relational trust, which is not easy to develop in a mass assessment model.”

Also speaking at the event, Professor Jannette Elwood, Queen’s University Belfast, noted that “all the research on teacher assessment is actually contextualised within ongoing debates within the assessment community of how we link theories of learning with theories of assessment in order to better understand assessment practice and assessment systems. These debates are making us face our tacit assumptions about fundamental assessment practices, and the kinds of new knowledge that we will need to inform constructive and equitable practices in the future.”

“Assessment can be seen as a cultural script,” she continued, “with the Junior and Leaving Certificates of Ireland and their reform being pertinent examples of these scripts which have pervading consequences for the educational experiences of all young people.  We need a reconsideration of assessment, what it is and how we understand it, if we are ultimately to change assessment practice for the better.”

Welcoming attendees to the Education Forum, Professor Philip Nolan, Maynooth University President, observed: “This year we have been marking the centenary of the Easter Rising and the 1916 Proclamation, but there is another document composed by Padraig Pearse that is also celebrating its centenary.  On the 1st January 1916 he published his pamphlet on the education system in Ireland entitled The Murder Machine in which he maintained that the main objective in education is to help the child to become their own true and best self.  The teacher, according to Pearse, should not bring his pupil a set of ready-made opinions or a stock of information, but ‘so infectious an enthusiasm as shall kindle new enthusiasm.’”

“The Maynooth Education Forum was established to analyse, critique and address the most pressing, challenging and complex issues in our ever-evolving education landscape.  Maynooth University has a hard-won reputation as Ireland’s leading provider of education research and education training, and we play an active role in shaping education policy.  This year our Education Forum explores assessment through the prism of 'The Murder Machine' and I look forward to a timely interrogation of the role of the teacher one hundred years on from Pearse’s study,” continued Professor Nolan.